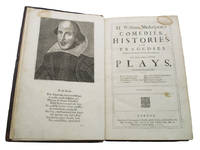 ìIncomparably The Most Important Work In The English Languageî The Fourth Folio Edition of 'Shakespeareís Plays' A Beautiful Tall Copy, With Seven New Plays SHAKESPEAR[E], William. Mr. William Shakespearís Comedies, Histories, and Tragedies. Published according to the true Original Copies. Unto which is added, Seven Plays, Never before Printed in Folio: viz. Pericles Prince of Tyre. The London Prodigal. The History of Thomas Lord Cromwel. Sir John Oldcastle Lord Cobham. The Puritan Widow. A Yorkshire Tragedy. The Tragedy of Locrine. The Fourth Edition. London: Printed for H. Herringman, E. Brewster, and R. Bentley, 1685. The Fourth Folio edition of Shakespeareís plays, first state of the imprint (without Chiswellís name). Tall copy. Large folio (14 1/2 x 9 1/4 inches; 368 x 233 mm). [12], 96, 99-160, 163-254, 243 [i.3. 253]-272, [1], [1, blank], 328, 303, [3, blank] pp. (page 33 is numbered 23, 107 is numbered 109, 109 is 111, 190 is 186, 191 is 187, 219 is 221, 246 is 234, 253 repeated is 243, and 67 is 76). Engraved frontispiece portrait of Shakespeare by Martin Droeshout, with ten-line poem by Ben Jonson, entitled ìTo the Reader,î underneath. Woodcut printerís device on title-page (McKerrow 263). Decorative woodcut initials. A large copy in contemporary full mottled calf, rebacked to style. With spine label, lettered in gilt. Boards stamped in blind. All edges speckled red. With quite generous margins. Small repaired closed tear on leaf F, barely affecting text. Occasional light soiling and a few small stains to title-page. A few tiny holes to leaves G2, affecting one letter and Cccc2 affecting two letters. A light dampstain to bottom outer corner of signature F. Previous owner's bookplate on front pastedown. Overall a beautiful copy of this important book. Housed in a custom 19th-century full morocco clamshell. The Fourth Folio was the stateliest of all the folios, being printed on a Royal stock, distinctly larger than the sheets of the Third Folio, which in turn is on a larger sheet than the First and Second. The last edition of Shakespeareís plays printed in the seventeenth century and the last to be printed before the editorial endeavors of the eighteenth century. First issue, without Richard Chiswell listed in the imprint, as he was listed on the second issue (the third issue lists Herringman alone). For this fourth edition Shakespeareís text was assigned to three different printers (one of whom has since been identified as Robert Roberts), who typeset their sections simultaneously, thus shortening the time it took to get to market. When the work was finished and the three sections of printed sheets collated, there was a shortage of 17 sheets from the second section (for the full press run), which were hastily reprinted without the characteristic borders around the text. Copies have been found with these second state sheets. In the copy offered here all of the sheets are in the original settings and with the borders. A second anomaly distinguishes this edition: ìThe copy for this edition was divided among several shops. Some miscalculation apparently occurred so that the equivalent of about one column of additional matter had to be crowded into Sig L [pp. 123/124] which is therefore printed in a much smaller type than the rest of the volumeî (Pforzheimer). Although there is no accurate census of the number of folios still extant today, it is believed that copies of each printing number only in the hundreds. Shakespeareís portrait is in the fourth state, as issued, with verses below (see Blayney, 19). The folios are ìincomparably the most important work in the English languageî (William A. Jackson). Because of their incalculable impact on the language, thought and literature of our world, they are among the most desirable of all English language books, the prizes of any collection. Bartlett 123A. Greg III, p. 1119. Jaggard, p. 497. Pforzheimer 910. Wing S2915. HBS 67106. $200,000

first state
used in book collecting to refer to a book from the earliest run of a first edition, generally distinguished by a change in some...[more]
rebacked
having had the material covering the spine replaced. ...[more]
bookplate
Highly sought after by some collectors, a book plate is an inscribed or decorative device that identifies the owner, or former...[more]
second state
used in book collecting to refer to a first edition, but after some change has been made in the printing, such as a correction,...[more]
gilt
The decorative application of gold or gold coloring to a portion of a book on the spine, edges of the text block, or an inlay in...[more]
New
A new book is a book previously not circulated to a buyer. Although a new book is typically free of any faults or defects,...[more]
morocco
Morocco is a style of leather book binding that is usually made with goatskin, as it is durable and easy to dye. (see also...[more]
edges
The collective of the top, fore and bottom edges of the text block of the book, being that part of the edges of the pages of a...[more]
leaves
Very generally, "leaves" refers to the pages of a book, as in the common phrase, "loose-leaf pages." A leaf is a single sheet...[more]
calf
Calf or calf hide is a common form of leather binding.  Calf binding is naturally a light brown but there are ways to treat...[more]
folio
A folio usually indicates a large book size of 15" in height or larger when used in the context of a book description....[more]
spine label
The paper or leather descriptive tag attached to the spine of the book, most commonly providing the title and author of the...[more]
device
Especially for older books, a printer's device refers to an identifying mark, also sometimes called a printer's mark, on the...[more]