Home W. Fraser Sandercombe MURDER ON THE MONTE - and - EVERY MAN AN ENEMY - The Fifth Sexton Blake Omnibus 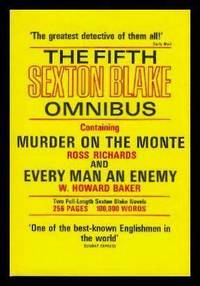 London: Howard Baker, 1969. 253 pp. First Hard Cover Edition. Both titles in a single volume: Murder on the Monte and Every Man an Enemy. Blue boards lettered in gilt on the spine. Light edge and corner wear on the dustjacket; price clipped; no interior markings. Sexton Blake, the detective, has been featured in many British comic strips, novels and dramatic productions since 1893. His adventures were featured in a wide variety of publications, in an assortment of languages, from 1893 to 1978. In all, there more than 4,000 stories by some 200 different authors. Blake was also featured in many movies, radio serials, and a 1960s ITV television series. The first Sexton Blake story was The Missing Millionaire by Harry Blyth writing as Hal Meredeth. It was published in the story paper The Halfpenny Marvel, number 6, on 20 December 1893. The earliest Blake stage play was in 1907. And the first Sexton Blake films were an assortment of silent ones, starting in 1909 and finishing up in 1928. Then, in 1935, came Sexton Blake and the Bearded Doctor, directed by George A. Cooper, with George Curzon playing the famous sleuth, followed by two more films in the 1930s, also starring George Curzon. After that came more films, radio shows (as recently as 2009), television series, even Sexton Blake playing cards and a 78 rpm record. All in all, a very successful franchise, rivaling Sherlock Holmes, The Saint, Ellery Queen and Nero Wolfe.. First Edition. Hardcover. Very Good/Very Good. 12mo. Book.

Credit card orders may be made through Biblio.com or through PayPal . Personal cheques or International (outside Canada) money orders made payable to W. Fraser Sandercombe. Within Canada, e-mail money transfers work out just fine. All prices are in U.S. dollars. Regardless of the book's weight, we rarely ask for extra on the shipping. Books are usually mailed within two business days of receiving payment. If you decide, for any reason, you don't want the book after all, you may contact us within one week and we'll arrange a return. Drop-ships are welcomed but no refunds can be given on a book sent to a third party.

Seller rating:
This seller has earned a 5 of 5 Stars rating from Biblio customers.
Biblio.com member since 2004
Burlington, Ontario
Ask Seller a Question

We are primarily an Internet-only bookstore, selling on-line for over twenty-three years; our shop can, however, be visited by appointment through an e-mail. We specialize in First Editions and collectible books (and usually have around 500 signed editions in stock at any given moment) ranging through most of the genres: Fantasy; Horror; Science Fiction; Mysteries; and a good selection of Literature; Historical Adventure; History; Outdoors; True Crime; and Assorted Non-fiction. We stock roughly 9000 books and add to our catalogues regularly.

First Edition
In book collecting, the first edition is the earliest published form of a book. A book may have more than one first edition in... [More]
spine
The outer portion of a book which covers the actual binding. The spine usually faces outward when a book is placed on a shelf.... [More]
12mo
A duodecimo is a book approximately 7 by 4.5 inches in size, or similar in size to a contemporary mass market paperback.... [More]
gilt
The decorative application of gold or gold coloring to a portion of a book on the spine, edges of the text block, or an inlay in... [More]