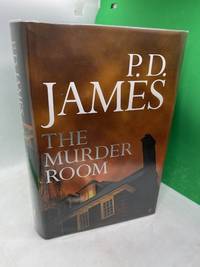 London: Faber & Faber, 2003. 1st. hardback. Fine, 1st edition (1st printing), unclipped d/j (v.g. in protective sleeve), maroon boards, white spine titling; text block firm, pages unmarked.. 8vo (230 x 150 / 9"" x 6""). When Commander Dalgliesh is persuaded by an old friend to visit the Dupayne, a small private museum on the edge of Hampstead Heath, he can have no idea that he will return to it one week later under very different circumstances. One of the family trustees has been horribly murdered and Dalgliesh and his team are called in to investigate a death which, from the first, is fraught with complications. Even before the murder, the museum was in tumult. A new lease is due to be signed and two of the trustees are determined to keep the museum open, the third passionately determined on its closure.The museum is dedicated to the years 1919-1939 and one of the galleries, the Murder Room, displays exhibits from the most notorious cases of those inter-war years. And now a modern killer is at work, the crimes uncannily echoing the cases on display. All the small group of people, the trustees, staff and volunteers, who work in the Dupayne, have the means and the opportunity for murder. One of them has the ruthlessness to kill and kill again.The investigation is complicated for Dalgliesh by his love for Emma Lavenham, but their relationship, at a sensitive stage for them both, is continually frustrated by the demands of his job. As step by step he moves closer to the murderer, is the investigation taking him further away from commitment to the woman he loves?

P. D. James is the author of 17 previous books, most of which have been filmed for television. Before her retirement in 1979, she served in the forensics and criminal justice departments of Great Britain’s Home Office, and she has been a magistrate and a governor of the BBC. The recipient of many prizes and honours, she was created Baroness James of Holland Park in 1991. In 2000 she celebrated her 80th birthday and published her autobiography, Time to Be in Earnest . From the Hardcover edition.

Seller rating:
This seller has earned a 5 of 5 Stars rating from Biblio customers.
Biblio.com member since 2021
Maidenhead, Berkshire
Ask Seller a Question

text block
Most simply the inside pages of a book. More precisely, the block of paper formed by the cut and stacked pages of a book.... [More]
New
A new book is a book previously not circulated to a buyer. Although a new book is typically free of any faults or defects, "new"... [More]
fine
A book in fine condition exhibits no flaws. A fine condition book closely approaches As New condition, but may lack the... [More]
spine
The outer portion of a book which covers the actual binding. The spine usually faces outward when a book is placed on a shelf.... [More]