Rare books Travel and Exploration More Rare Books from Michael Treloar Antiquarian Booksellers The Murray River. Being a Journal of the Voyage of the 'Lady Augusta' Steamer from the Goolwa, in South… 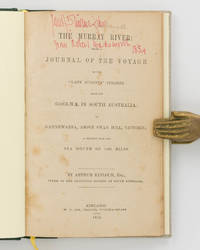 The Murray River. Being a Journal of the Voyage of the 'Lady Augusta' Steamer from the Goolwa, in South Australia to Gannewarra, above Swan Hill, Victoria, a Distance from the Sea Mouth of 1400 Miles

The Murray River. Being a Journal of the Voyage of the 'Lady Augusta' Steamer from the Goolwa, in South Australia to Gannewarra, above Swan Hill, Victoria, a Distance from the Sea Mouth of 1400 Miles

Adelaide: W.C. Cox, Printer, 1853. First Edition. Hardcover. Very Good. Adelaide, W.C. Cox, Printer, 1853. Octavo, 46 pages. Relatively recent quarter morocco and buckram (by the Law Bindery, Melbourne); title leaf a little foxed, with minimal light scattered foxing to a few other leaves; an excellent copy with most interesting provenance (see below). The author, Clerk of the Executive Council of South Australia, was on board the vessel; this is his account of the first successful navigation of the Murray as far as Swan Hill by Captain Francis Cadell. Fellow-passenger James Allen also published his version of events. Captain William Randell and his paddle-steamer 'Mary Ann' left Goolwa at the Murray mouth ahead of Cadell and travelled much farther up the Murray, but Cadell overtook him en route and reached Swan Hill first. However, both men deservedly earned the bonus of 2000 pounds offered by the South Australian Government 'for each of the first two steamers to travel up the Murray as far as the Darling junction' (Australian Dictionary of Biography). We have noted previously the manuscript correction (page 5, line 4, 'largest' to 'longest' river), and presume it is in Kinloch's hand. At the head of the title page of this copy is the pencilled ownership name (possibly his signature) of Robert Wadsworth, over-written in red ink by the subsequent owner, 'John Shillinglaw from Robert Wadsworth 1854'. Shillingworth has annotated the text in both pencil and red ink (three and seven pages respectively). The pencilling identifies the 'gentleman's son' working as a shepherd as 'old "Bigodd Macdonald"', and asks elsewhere of a sentence nine lines long 'what does this wretched twaddler mean?' (he's got a point, too!). Robert Wadsworth was eventually Clerk of the Victorian Executive Council from 1875 to 1889; of passing interest to bibliophiles, his son Arthur (1864-1931) was the first Commonwealth Parliamentary Librarian, having 'charge of the Commonwealth library for over twenty-six years while also being titular head of the [Victorian] State parliamentary library' (Australian Dictionary of Biography). John Joseph Shillinglaw (1831-1905), public servant and historian, was the eldest son of the librarian of the Royal Geographical Society. 'He was to study under Captain John Washington, eminent maritime surveyor, and in 1852 he migrated with his father and brothers to Victoria, arriving in October. From November he was chief clerk of petty sessions at Williamstown, and in 1854 was appointed inspector and sometime acting superintendent of the Water Police. He was also secretary to the Steam Navigation Board until December 1857. In 1856-69 he was shipping-master for the Port of Melbourne and registrar of seamen; he helped to found the first Sailors' Home and did much to improve the working conditions of seamen'. It is hardly surprising that he should be given a copy of this book soon after its publication. He held various public service positions over the years; from 1885-94 he 'was secretary to the royal commission on vegetable products. He was also secretary to the Board of Viticulture. Shillinglaw was an enthusiast in whatever department he worked; however, he is remembered for his association with colonial literature and history'. He was the author of numerous books, and on his death his estate 'included a vast collection of papers and rare books', presumably including this item (ADB). Ferguson 11196.

title page
A page at the front of a book which may contain the title of the book, any subtitles, the authors, contributors, editors, the...[more]
buckram
A plain weave fabric normally made from cotton or linen which is stiffened with starch or other chemicals to cover the book...[more]
morocco
Morocco is a style of leather book binding that is usually made with goatskin, as it is durable and easy to dye. (see also...[more]
foxed
Foxing is the age related browning, or brown-yellowish spots, that can occur to book paper over time. When this aging process...[more]
octavo
Another of the terms referring to page or book size, octavo refers to a standard printer's sheet folded four times, producing...[more]
A.N.
The book is pristine and free of any defects, in the same condition as ...[more]
First Edition
In book collecting, the first edition is the earliest published form of a book. A book may have more than one first edition in...[more]