Home Kayleighbug Books My Life in and out of the Rough: The Truth Behind All That Bull**** You Think You Know About Me 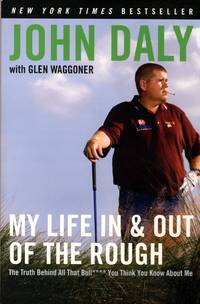 My Life in and out of the Rough: The Truth Behind All That Bull**** You Think You Know About Me

My Life in and out of the Rough: The Truth Behind All That Bull**** You Think You Know About Me

New York: Harper Perennial, 2007-03-27. Paperback. Good. spine creasing, edge wear, some light soiling to page ends; From the unapologetic bad boy of professional golf comes a rip-roaring account of his rollercoaster life and career. Daly reveals how a down-home Everyman from Arkansas managed to conquer the green, dodge the hazards, and finally take control of his life (sort of). 16-page color photo insert.

Ever since his astonishing victory in the 1991 PGA Championship, John Daly, known affectionately on the PGA Tour as "Big 'Un," has enthralled fans with his big drives, bigger personality, and "Grip It and Rip It" approach to golf — and to life.Long John, usually seen with a Marlboro Light dangling from his lip, is the unchained, unpredictable, unapologetic bad boy of professional golf. "The only rules I follow," JD likes to say, "are the Rules of Golf."Daly's play-it-as-it-lays approach drives My Life in and out of the Rough, a thrillingly — and sometimes shockingly — candid memoir of a larger-than-life athlete battling assorted addictions (alcohol, gambling, chocolate, sex), his weight, and, perhaps worst of all, divorce lawyers. (He's been married four times.)A two-time major winner before he turned thirty, John Daly is one of the most popular athletes in the world. Taking readers with him off the fairway and into his $1.5-million motor home for a rollicking ride through his life — an ever-churning world of booze, burgers, casinos, country music, and breathtaking moonshots — Daly reveals how a down-home Everyman from Arkansas managed to rise to the peak of the golf world, escape from the depths of abject depression, and, finally, take control of his life.Well, sort of.

All items are guaranteed to be in the condition indicated and to be the title described by the ISBN# indicated in conjunction with the Title/Author. If you are dissatisfied for any reason you may return the item for a full refund.