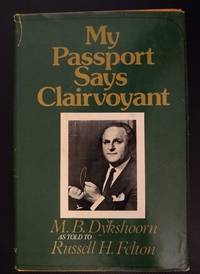 by Dykshoorn, M. B., and Felton, Russell H

NY. 1974. Hawthorn Books., 1974. Very Good Hardcover in a Good DJ. Clean unmarked book. DJ torn along the edges.book club edition. 189p. Highlighted by dramatic, fully documented case histories, this amazing autobiography traces the life and spectacular psychic achievements of the renowned Dutch clairvoyant, M. B. Dykshoorn, in Europe, Australia, and the United States. Born in a small Dutch provincial town, Dkyshoorn was not immediately aware that his psychological "difference" from other people arose from his strong psychic abilities. In fact, his uncanny ability to know things before they happened constantly got him into trouble with his parents before they realized the nature of his unusual talents. In 1949, by psychic means alone and in the presence of a notary public, he found a cache of money that had been buried during World War II. In the town of Breda, Holland, he located~again in the presence of authoritative eyewitnesses~a metal box that had been buried under a cellar floor for more than three hundred years. Later, he gave police in Ruhrort, Germany, data that led to the solution of two criminal cases within twenty~four hours ~all via long~distance telephone. Near Ypres, Belgium, he located and unearthed the remains of seven soldiers killed in World War I, more than forty years earlier. In Antwerp he supplied authorities with information that led to the recovery of the body of a missing girl from a city canal. Recently, he was called in to employ his psychic talents in helping to solve a multiple murder that had occurred in a North Carolina town. With no prior knowledge of the case to guide him, Dykshoorn reenacted each killing, indicated the precise spot where each body was found, then with uncanny accuracy traced the movements of the murderers on the fatal day. The information he supplied aided police in rounding up the culprits and bringing them to trial. Dykshoorn is a well~known lecturer and consulting clairvoyant. His work is supported by documentation~much of it in the form of affidavits prepared by clients and members of his lecture audiences. Philosophically, the book rejects theories of ESP that encompass mysticism or occultism, and pleads for a more level~headed approach to parapsychology and the investigation of psychic phenomena. ~Mr. Felton is a close friend of M. B. Dykshoorn. He began his career as a public relations officer and is presently a freelance writer who has published many business and travel articles in newspapers and magazines in England, Australia, and Canada. He spent two years in Europe verifying the vast weight of documentation~eyewitness reports, affidavits, official statements, and newspaper accounts ~ that supports Mr. Dvkshoorn's amazing accomplishments.AB274

Glading Hill Emporium Purveyors of Fine Antiques Collectibles, Antiquarian Books, Children\\\\\'s books and out of print books. Feel free to Contact us about specific book requests, as we have a large inventory.

edges
The collective of the top, fore and bottom edges of the text block of the book, being that part of the edges of the pages of a... [More]