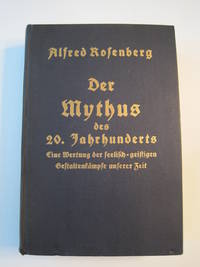 by Rosenberg, Alfred; [from the library of Radio Munich]

München: Hoheneichen - Verlag, 1930. First printing of the official exposition of the NAZI world view. From the library of Radio Munich, with their small ink stamps. Very Good condition. SEE PHOTOS. A square, reasonably tight copy. Tiny brown speckles (light foxing) to a few pages at the beginning and end. Slight waviness to the upper margin of some pages. No stain. No underlining. No highlighting. No margin notes. First Edition (1. Auflage). First printing of the standard work by the Nazis' chief ideologist. The year of publication, 1930, is imprinted on the title page. Bound in the original gilt decorated black cloth. Alfred Rosenberg (1893-1946) was editor of the Nazi party organ, VÖLKISCHER BEOBACHTER. It was his anti-Semitic, anti-Christian, and neo-pagan book, DER MYTHUS DES 20. JAHRHUNDERTS [The Myth of the Twentieth Century], that supplied Adolf Hitler and the Nazis with a philosophical and pseudo-scientific basis for their racist doctrine. In 1933, Rosenberg was appointed foreign affairs secretary of the party. He became minister for the occupied Eastern territories in 1941. Following conviction at the Nuremberg war crimes trials, Rosenberg was executed in 1946. With the possible exception of Hitler's MEIN KAMPF, Rosenberg's DER MYTHUS DES 20. JAHRHUNDERTS was the book that most influenced the German people in their acceptance of Nazi ideology and doctrine. This copy is from the library of Radio Munich, with two small ink stamps: "Eigentum des Radio München." The association with Radio Munich is important for two reasons: 1) Propaganda minister Joseph Goebbels and the Nazis relied heavily on radio to disseminate their ideology and to build support among the German people. 2) Nazi party headquarters was in Munich and Radio Munich was at the epicenter of the Nazi propaganda machine during the Third Reich's early years. In a speech, entitled: The Radio as the Eighth Great Power, given on 18 August 1933, Goebbels said: "Future generations may conclude that the radio had as great an intellectual and spiritual impact on the masses as the printing press… It would not have been possible for us to take power or to use it in the ways we have without the radio... It is no exaggeration to say that the German revolution, at least in the form it took, would have been impossible without... the radio." Hans Fritzsche, a leading Nazi radio broadcaster, wrote: "Without exaggerating, one can say that there is no country in the world where the radio is anywhere near as intensive an intermediary between the government and the people as in Germany." Source: DR. GOEBBELS UND SEIN MINISTERIUM," in Hans Heinz Mantau-Sadlia, DEUTSCHE FÜHRER DEUTSCHES SCHICKSAL. DAS BUCH DER KÜNDER UND FÜHRER DES DRITTEN REICHES (Munich: Verlag Max Steinebach, 1934), pp. 330-342. "MYTH was unquestionably the standard text of National Socialist Party ideology." -- Fritz Nova (in ALFRED ROSENBERG, NAZI THEORIST OF THE HOLOCAUST, p. 8).. First Edition (1. Auflage). Hardcover. Very Good condition/No dust jacket. 8vo. 670pp. Great Packaging, Fast Shipping.

Please add 8.375% sales tax for any order sent to a Nevada address (unless you have provided an official resale or tax exemption certificate). All items are guaranteed as described. We take pride in our book descriptions. Every item is meticulously examined so that condition and edition are listed as accurately as possible. We strive to provide pertinent bibliographical details. In addition, our listings frequently include content summaries, details on provenance, and/or biographical notes on the author. Our descriptions are protected by copyright, and unauthorized use is strictly prohibited. Violators will be prosecuted. We always take the time necessary to carefully package your order so that it arrives safely and securely. Shipping cost estimates are based on an average size book and are intended to cover only our actual expenses. If your order includes multiple volumes, oversize, heavy, or valuable items, we may contact you to request authorization for additional postage. RETURNS: If not as described, your order is returnable within 10 days of receipt. Prior notice is requested and appreciated. Returns must be securely packaged and arrive here safely. A full refund will be issued if the return is attributable to a mistake on our part; otherwise shipping costs are not refundable.

Seller rating:
This seller has earned a 5 of 5 Stars rating from Biblio customers.
Biblio.com member since: 2008
Henderson, Nevada
Ask Seller a Question

About Books (Genny and Michael Winne, proprietors, formerly of Parsippany, New Jersey) has been selling rare and OP books since 1985. Besides book fairs and mail-order catalogues, long-time collectors and dealers will remember our lengthy For Sale ads in the Antiquarian Bookman and similar magazines. Our inventory of over 40,000 volumes is especially strong in the specialties listed, but contains fine books in a variety of other fields as well. Because most of our books are stored in protective boxes, rather than on shelves, they cannot be viewed as a whole. If you wish to visit us to examine specific titles, please provide 24 hours notice and we will make them available for your inspection. Phone calls to (702) 750-2722 are welcome, but please, only between the hours of 8am and 10pm (west coast time).

gilt
The decorative application of gold or gold coloring to a portion of a book on the spine, edges of the text block, or an inlay in...[more]
tight
Used to mean that the binding of a book has not been overly loosened by frequent use.
title page
A page at the front of a book which may contain the title of the book, any subtitles, the authors, contributors, editors, the...[more]
Cloth
"Cloth-bound" generally refers to a hardcover book with cloth covering the outside of the book covers. The cloth is stretched...[more]
First Edition
In book collecting, the first edition is the earliest published form of a book. A book may have more than one first edition in...[more]
jacket
Sometimes used as another term for dust jacket, a protective and often decorative wrapper, usually made of paper which wraps...[more]