Join us October 7–16, 2022 for our upcoming virtual antiquarian book fair!
Preregister now for Biblio.live and get $10 to use at the fair.
Home Bolerium Books Inc., ABAA/ILAB NACLA report on the Americas: 1985 complete run formerly NACLA'S Latin America and empire report (originally… 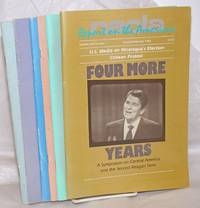 New York: North American Congress on Latin America, 1985. newsletter. various pagination, in glossy, stapled, illustrated wraps. A complete set of Volume nineteen, 6 numbers, bi-monthly. Cover wraps worn issue No. 2 has fading along the edges, 3 of the 6 have address label on rear outside wrap, else in good condition. This volume includes "Four More Years: a symposium on Central America and the second Reagan term," "Debt: Latin America hangs in the balance," "Sandinista Foreign Policy: strategies for survival," "Peru: human rights and elections," "Mare Nostrum: US Security policy in the English-speaking Caribbean," "Interview with the FMLN," "Visions of the Kingdom: The Latin American Church in conflict," "Mexico in Crisis," George Black on the Guatemalan army, Marc Edelman on the Washington bailout of Costa Rica, also articles, footnotes, references, photos, illustrations, tables. The information source for the Left in Latin America. Vol. XIX, Nos. 1- 6, January - December. The NACLA Newsletter, which became the Latin America & Empire Report in the early 1970s, was the primary source for Left-wing reportage on events and institutions affecting the people of Latin America, occasionally expanding coverage to the Mid-East, Southeast Asia and,of course, the Empire. Each issue, published bi-monthly, is filled with lists,statistics, reading lists, tables, maps and other extremely useful information on the activities of the CIA, US and multinational corporations, banking institutions and military-police tactics throughout South and Central Americas, the islands and Mexico.

Seller rating:
This seller has earned a 5 of 5 Stars rating from Biblio customers.
Biblio.com member since 2005
San Francisco, California
Ask Seller a Question

Established in 1981 in San Francisco, we specialize in books and ephemeral materials related to the history of Labor and other social movements, including the struggles for Black and Chicano equality, the Gay liberation movement, Feminism, and Asian-American activism, as well as the Far Right. In recent years Bolerium has expanded into materials in non-western languages, especially from East Asia, and has also placed more emphasis on ephemera, with tens of thousands of original leaflets, pamphlets, and posters in stock. You can sign up for free email lists in our subject areas at www.bolerium.com. We are located in San Francisco at 2141 Mission, Suite 300 (between 17th & 18th St.). We're open by appointment only..

edges
The collective of the top, fore and bottom edges of the text block of the book, being that part of the edges of the pages of a... [More]