Home Leaf and Stone Books A Narrative of Missionary Enterprises in the South Sea Islands; With Remarks Upon the Natural History of the… 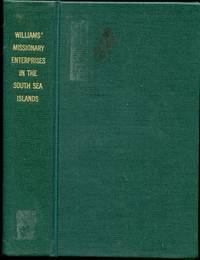 A Narrative of Missionary Enterprises in the South Sea Islands; With Remarks Upon the Natural History of the Islands, Origin, Languages, Traditions, and Usages of the Inhabitants. [Association Rev. George Cheyne]

A Narrative of Missionary Enterprises in the South Sea Islands; With Remarks Upon the Natural History of the Islands, Origin, Languages, Traditions, and Usages of the Inhabitants. [Association Rev. George Cheyne]

Condition
Good with no dust jacket
Seller
Leaf and Stone Books
Seller rating:
This seller has earned a 5 of 5 Stars rating from Biblio customers.
Toronto, Ontario

London: J. Snow. Good with no dust jacket. 1837. First Edition. Hardcover. X, 589, ad. Folding map. Color frontis, engraved vignette on title, all plates and engravings present as called, some plates still have the tissue guard. 1st edition, second thousand. With a very interest Canadian/English provenance: the first free endpaper has a gift inscripted "Presented by Col. Forlong of 43rd Regiment to his much esteemed friend Rev. G. Cheyne. Amherstburg." The 43rd was in Canada and "went to New Brunswick in 1835, and was one of the regiments dispatched from New Brunswick to Quebec, on horse-sleighs, in the depth of the winter of 1838-39, on the occasion of the insurrection in Lower Canada. The regiment was employed in Canada until 1844, when it removed to Nova Scotia, and came home in 1846." Col. Forlong is documented with the 43rd. George Cheyne, a Scots, was the first Presbyterian minister west of London and was called in Amherstburg c1831-1834. A church in Amherstburg, Ontario is named for him. Rebound in dark green library buckram with gilt to the spine, just a faint hint of a library spine label, some faint library marks to front cover, end papers renewed, verso of title has library marks, last page of ads has some library numbers, otherwise clean and unmarked, text pages are clean but a bit toned, plates and folding map are clean and bright. A very handsome copy with an interesting provenance. "In 1817, John Williams and his wife, Mary Chawner, voyaged to the Society Islands, a group of islands that included Tahiti, accompanied by William Ellis and his wife. John and Mary established their first missionary post on the island of Raiatea. From there, they visited a number of the Polynesian island chains, sometimes with Mr & Mrs Ellis and other London Missionary Society representatives. Landing on Aitutaki in 1821, they used Tahitian converts to carry their message to the Cook islanders. One island in this group, Rarotonga (discovered by Captain John Dibbs of the colonial schooner Endeavor in August 1823, with Rev. Williams on board) , rises out of the sea as jungle-covered mountains of orange soil ringed by coral reef and turquoise lagoon; Williams became fascinated by it. John and Mary had ten children, but only three survived to adulthood. The Williamses became the first missionary family to visit Samoa. They returned to England in 1834." ; Ex-Library; 8vo 8" - 9" tall; 589 pages .

Books not as described may be returned for a refund. Please contact us by e-mail before making a return.

Seller rating:
This seller has earned a 5 of 5 Stars rating from Biblio customers.
Biblio.com member since 2005
Toronto, Ontario
Ask Seller a Question

About Leaf and Stone Books

Formerly Greekdrama Books Specializing in classical, medieval and ancient languages, history and cultures; antiquarian and unusual books; and interesting used books. We also carry many early printed books, particularly in the subjects of classics and religion, including incunabula and manuscripts.

gilt
The decorative application of gold or gold coloring to a portion of a book on the spine, edges of the text block, or an inlay in... [More]
G
Good describes the average used and worn book that has all pages or leaves present. Any defects must be noted. (as defined by AB... [More]
First Edition
In book collecting, the first edition is the earliest published form of a book. A book may have more than one first edition in... [More]
spine
The outer portion of a book which covers the actual binding. The spine usually faces outward when a book is placed on a shelf.... [More]
vignette
A decorative design or illustration placed at the beginning or end of a ... [More]
rebound
A book in which the pages have been bound into a covering replacing the original covering issued by the publisher.
jacket
Sometimes used as another term for dust jacket, a protective and often decorative wrapper, usually made of paper which wraps... [More]
verso
The page bound on the left side of a book, opposite to the recto page.
New
A new book is a book previously not circulated to a buyer. Although a new book is typically free of any faults or defects, "new"... [More]
buckram
A plain weave fabric normally made from cotton or linen which is stiffened with starch or other chemicals to cover the book... [More]
spine label
The paper or leather descriptive tag attached to the spine of the book, most commonly providing the title and author of the... [More]