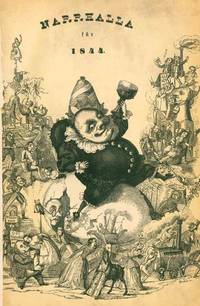 Other titles: Narrhalla. Mainzer Carnevalszeitung, and: Narrhalla. Mainzer Carnevals-Zeitung. Ein Organ für die Mainzer Karnevalsbestrebungen [Mainz carnival paper: an organ for the Mainz carneval effort]. Vols. I-VI (of VII published), bound in two volumes. Mainz: Wirth, 1841-1846. Octavos (22.5 × 16 cm). Later brown calf over four raised bands; spine labels; 128; 112; 1, [1] 11-132 (complete!); 84, 23, [1]; 126, [1], 16; and 136 pp. Occasional light foxing and spotting; a few leaves with smaller closed tears; overall about very good. Nearly complete run of the most important German carneval periodical and a significant document of the German "Vormärz" period. After the first two years, Narrhalla became the brainchild of its second editor, Ludwig Kalisch (1814-1882), a German Jewish writer and publisher who also authored most of the articles. Aside from an outlet for more light-hearted humor, carneval journals such as this were an important forum for critizicing the repressive and feudalist aspects of German society, as well as lampooning its strict censorship laws. Kalisch's witty, caustic satire provoked the censors as early as 1843, and Narrhalla was temporarily forbidden in 1844. As revolutionary movements swept across Europe, Kalisch defended ever more clearly such rights as freedom of press, equality before the law, equal treatment for Jews, and other liberties. In 1848, the journal was shuttered by the censors. After the failed German Revolution of 1848, the journal remained prohibited for a decade; only beginning in 1857, a similar series began to appear. Like Heinrich Heine, whose wit and literary acumen he evokes, Kalisch eventually went into exile in France, after being sentenced to death for supporting the Palatine uprising of 1849.

Narrhalla is equally remarkable for its visual design: the front wrappers feature elaborate allegorical compositions incorporating figures such as Till Eulenspiegel and other historically famous "fools." Throughout, the journal's title is spelled using a series of ever-changing, highly intricate anthropomorphic letters. It also contains numerous caricatures and satirical drawings as well as rebuses and other visual riddles, which often border on the bizarre and even lend the journal a proto-surrealist feel.

In total, seven volumes were published, each containing several issues, all of which were printed during each year's carneval season. The pagination of the third volume skips pp. 1-10, beginning with page 11. A comparison with the copy at Mainz Municipal Library suggests that this was an intentional omission, as 11 is the number of the Mainz Fastnacht. Pages 123-136 of volume six have been accidentally bound between pages 14 and 15 of volume four. KVK and OCLC only trace two complete holdings worldwide, at Staatsbibliothek zu Berlin and Stadtbibliothek Mainz, and show no copies in North America.

wrappers
The paper covering on the outside of a paperback. Also see the entry for pictorial wraps, color illustrated coverings for... [More]
calf
Calf or calf hide is a common form of leather binding. Calf binding is naturally a light brown but there are ways to treat the... [More]
spine
The outer portion of a book which covers the actual binding. The spine usually faces outward when a book is placed on a shelf.... [More]
leaves
Very generally, "leaves" refers to the pages of a book, as in the common phrase, "loose-leaf pages." A leaf is a single sheet... [More]