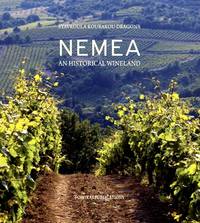 Τhe book comprises independent narrative texts of historical, mythological, folklore and vinicultural interest, inspired by the long history of the 'wine capital' of the Peloponnese, the district of Nemea.
It emerges from these texts that the district is an historical 'wineland', an area that has been producing renowned wine continuously from Antiquity and Byzantine times to the present, regardless of whether Franks, Ottomans or Venetians occupied the region in the Middle Ages.
The area is mentioned in the Homeric epics by the name of Arae¬thyrea and is described as lovely; in historical times it is called Phliasia and produces the famed Phliasian wine from the Phliasian vine; in the Middle Ages it takes the name Agios Georgios and the Phliasian vine is renamed as Agiorgitiko grape, name by which it is cultivated today in the winelands of Nemea, as the district has been known officially since 1923.
Thanks to the high-quality wine produced from the Agiorgitiko variety, the edaphoclimatic conditions of the area and its cultural heritage, in 1971 the toponym Nemea was acknowledged as 'Appellation of Origin' for dry red wines made from the indigenous variety of Agiorgitiko vine, adapted over the centuries in the winelands of seventeen villages which make up the production zone for wines with 'Protected Designation of Origin' NEMEA.

In the verdant vine-filled landscape of modern Nemea stand the nine columns of the once splendid temple of Nemean Zeus of ancient Nemea, in whose honour the Nemean Games were held. Archaeological site (sacred grove, stadium, museum) and modern winelands, the two historical and economic mainstays of the area, in the high-tech wineries of which one of the noblest products of Greek agriculture is produced.

Phliasian wine and the Nemean Games

Memories from the remote past

The people of the Phliasia chora

Ancient Cleonae and the temple of Herakles

Agios Georgios, the Polyphengos of the Middle Ages

In February prune, examine not the moon

The Columns: Many admired them, passersby. One fell in love with them and stayed near them

Agiorgitiko wine in the 19th century

The wine of Nemea in the 20th century

The wine Appellation of Origin Nemea


IMPORTANT: The shipping cost is an important parameter of this order; it is NOT included in the price and depends on the actual weight and destination; you will have to approve it after the confirmation of the order. You may ask for an estimate before placing the order at: dem.siatras@gmail.com

THE SHIPPING COST includes postage and package for books weighing up to 500 gr. For heavier books a surcharge according to the actual weight and destination applies.

IMPORTANT: All orders are shipped as FOB unless you have asked for an insured shipment.

All books are checked before shipping and then are packed well to prevent damages on transit. If you receive a seriously damaged parcel, contact immediately with the transporter to claim for a compensation.

In general we ship from Athens, Greece. Some books printed in Cyprus / Bulgaria may be shipped directly from Nicosia / Sofia to the recipient to minimize the shipping cost.

Thirty days return guarantee: a partial refund applies for up to 30 days after delivery. Ask for instructions please.

If your order has not been delivered within eight weeks, please contact immediately with us. Also, keep in mind that after six months it's not possible to search for a parcel.

Due to the current pandemic, the regular transit times are much longer, depending on the destination.

Seller rating:
This seller has earned a 4 of 5 Stars rating from Biblio customers.
Biblio.com member since 2011
ATHENS
Ask Seller a Question

Cloth
"Cloth-bound" generally refers to a hardcover book with cloth covering the outside of the book covers. The cloth is stretched... [More]