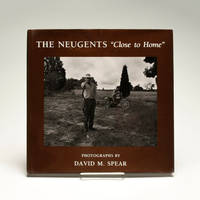 The Neugents: "Close to Home"

"I began photographing the Neugents in 1987. I had chosen them as subjects because of the uniqueness of their lifestyle. What I found fascinating about them was their stubborn commitment to the attitudes more reminiscent of tobacco farmers of the early part of this century. They were throwbacks who continued to struggle with a system that had been replaced by agribusiness and industrial development.

When I began photographing, my approach, as a documentary photographer, was fairly typical of the American genre. that is to say, they were treated as objects to be photographed by my camera. This is the tradition of photojournalism. Since I had been a photojournalist, I thought about what I might do to change this approach. I wanted to make these images more intimate,more empathetic...more into their world. Time seemed to be the primary ingredient. By allowing more time, trust developed and the door eventually opened to more intimate photo possibilities.

I have been told that these images resemble Depression photographs. The Neugents are, in fact, nothing like the people photographed during the Depression. Those images were of dispirited people, who were hungry and depressed because they had no work and no hope for a future. The Neugents, by contrast, are spirited, able-bodies, and they have work when they want it. It should be plain to the viewer that there is real vitality in these people."

100% of BMCM+AC's proceeds from your purchase supports museum exhibitions, publications, education, and events. Visit blackmountaincollege.org to learn more about what we do!

Seller rating:
This seller has earned a 5 of 5 Stars rating from Biblio customers.
Biblio.com member since 2019
Asheville, North Carolina
Ask Seller a Question

Black Mountain College Museum + Arts Center is dedicated to preserving and continuing the legacy of Black Mountain College as a forerunner in experimental, interdisciplinary arts and education. The BMCM+AC Bookstore sells books relating to BMC, the people who lived and learned there, and publications of the Jargon Society, founded by BMC alumnus and Asheville native Jonathan Williams.

jacket
Sometimes used as another term for dust jacket, a protective and often decorative wrapper, usually made of paper which wraps... [More]
Cloth
"Cloth-bound" generally refers to a hardcover book with cloth covering the outside of the book covers. The cloth is stretched... [More]