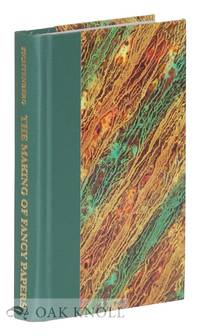 NEW AND COMPLETE MANUAL ON THE MAKING OF FANCY PAPERS BY M. FICHTENBERG

NEW AND COMPLETE MANUAL ON THE MAKING OF FANCY PAPERS BY M. FICHTENBERG

55 Copies Available from This Seller

The craft of marbling paper was introduced into Europe and the Middle East from Turkey and Germany during the last two decades of the sixteenth century, and then into France in the first decade of the seventeenth century. England, Italy, Spain, Sweden, and other European countries began marbling as well, but the production outside of England still remained small. It was not until its introduction into the British Isles in 1750 that marbling increased in popularity.

In France, marbling was first performed by bookbinders who catered mainly to the needs of the book trade. This often meant marbled papers were used for decorating "extra" bindings, or even sometimes made for people who restricted their output to wallpaper. Fortunately, the nineteenth century saw a change in French marbling, as they were introduced to a Turkish pattern containing an infusion of turpentine in the final color. This created an appearance of a network of fine, lacey holes.

New and Complete Manual on the Making of Fancy Papers documents the changes and innovations in French marbling, and describes the marbling and fancy paper trades of the mid-nineteenth century. It also provides technical details on the manufacture of these papers and is a key source for information that couldn't be found anywhere else at the time.

This manual describes many steps in the marbling process. It describes the methods of making colors and the preparation of the aluminum serving to give body to the colors including reds and violets, yellows, blues, and greens. It discusses the preparation of hide glue, paste, glue, glazing, polishers, workshops, troughs, papers that are quilted, papers exhibiting the grain of wood, granite papers, printing, varnishing, sealing wax, and a variety of other details. Four pages of color illustrations complete the book.

All items are offered subject to prior sale. We accept payment with Visa, MasterCard, Discover, American Express, wire transfers in US$, and personal or business checks if in US$ drawn on a US bank, or personal or business checks in English pounds drawn on an English Bank. Invoices and shipments are processed and shipped within 5 business days (excluding weekends and holidays.) Orders in the USA are normally shipped using the US Post office. Other services such as UPS, air mail through the US Post Office and FedEx are available upon request only. Foreign shipments are typically sent via Brokers Worldwide International Postal Services, a combination of air and surface that usually takes 3 to 5 weeks for delivery depending on location. In the US, please include US $7.50 for first volume and US $1.00 each additional volume. If ordering outside the US, postage is $16.95 for a single volume unless the book is very large. Postage for heavy books and larger quantities is based on weight. Books are returnable within two weeks. Please notify us before returning a book. Thank you.

Seller rating:
This seller has earned a 5 of 5 Stars rating from Biblio customers.
Biblio.com member since: 2006
New Castle, Delaware
Ask Seller a Question

Oak Knoll Books was founded in 1976 by Bob Fleck, a chemical engineer by training, who let his hobby get the best of him. Somehow making oil refineries more efficient using mathematics and computers paled in comparison to the joy of handling books. Oak Knoll Press, the second part of the business, was established in 1978 as a logical extension of Oak Knoll Books. Oak Knoll Books is a thriving company that maintains an inventory of about 20,000 titles. Our main specialties are books about bibliography, book collecting, book design, book illustration, book selling, bookbinding, bookplates, children's books, Delaware books, fine press books, forgery, graphic arts, libraries, literary criticism, marbling, papermaking, printing history, publishing, typography & type specimens, and writing & calligraphy - plus books about the history of all of these fields.