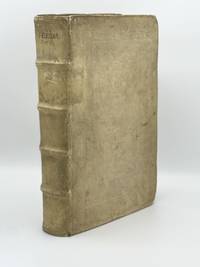 Basel: Michael Isengrin, 1543. From the Collection of Arthur & Charlotte Vershbow. Folio (377 x 242 mm). Woodcut printer's device on title, large Isengrin device on final recto, full-page woodcut portrait of Fuchs on title verso, 517 botanical woodcuts by Viet Rudolph Speckle after Heinrich Füllmaurer and Albert Meyer, woodcut portraits of the three artists at end, woodcut historiated initials in several sizes. Contemporary German blindstamped pigskin over pasteboard. Ties lacking, some minor wear at extremities, a few small repairs; title and final leaf with very minor fingersoiling, tiny wormhole in lower margins of second half of volume occasionally touching extreme lower image. Provenance: purchased from Sandbergs Bokhandel, 1962. FIRST EDITION IN GERMAN OF 'PERHAPS THE MOST CELEBRATED AND MOST BEAUTIFUL HERBAL EVER PUBLISHED' (PMM), with amendments and an additional 5 woodcuts not present in the Latin edition published the previous year as De Historia stirpium. The plates were printed from the same blocks, though the captions and numbering have been changed, many mistakes were corrected and five additional woodcuts were inserted, namely those depicting 'Hunerbis', 'Spitziger Wegerich', 'klein Schlangen kraut', 'Knabenkrautweible' and 'Kuchens chell'.

Fuchs was an eminent physician and botanist of the early German Reformation who after completing his medical studies in Ingolstadt and teaching in that university, moved to Tübingen, where he served Duke Ulrich of Württemberg. Here he contributed greatly to the reform of the local university, which became the first German institution of its kind to adopt a humanist and Lutheran program. His reputation became immortalized with a plant name-and the color fuchsia itself-being named for him. Fuchs wrote many medical commentaries and treatises, though this herbal was by far his major achievement. As he explains in the preface of the work, he wished his own German translation to reach a broader audience than Latinate scholars and physicians, who had found in herbals a fundamental medical tool since Antiquity and the Middle Ages and hailed with enthusiasm the Latin first edition of the work. Fuchs realized that his own herbal could provide that knowledge not only to the specialist but also to the layman interested in plants and the popular remedies derived from them, or simply interested in the natural world surrounding him. In preparing the German edition Fuchs took the opportunity to augment his text with an index of illnesses treatable with herbs, enhancing its usefulness and popular appeal.

Fuchs's botanical descriptions are very accurate and mark a significant advancement in medical botany in respect of earlier somewhat crude herbals. This work describes over 400 German and 100 foreign plants, each with its own detailed illustration, and includes the first description of several recently-discovered American plants, such as pumpkin, chili pepper, snap bean and maize (mistakenly thought by Fuchs to originate in Turkey). It was highly influential, with many reprints and translations into the main European vernaculars; its woodcuts were reused in all later editions, pirated several times and copied in the works of Hieronymus Bock, Rembert Dodoens, William Turner, amongst others. The drawings were made from life by Albert Meyer, largely relying on the plants carefully gathered by Fuchs in his garden in Tübingen. Heinrich Füllmaurer transferred the illustrations onto woodblocks, which were later cut by Viet Rudolph Speckle. The three artists received the unprecedented honor of having their portraits included in the book. Adams F-1107; Cleveland Collections 62; Nissen BBI 659; Pritzel 3139; Stafleu & Cowan TL2 1910.

recto
The page on the right side of a book, with the term Verso used to describe the page on the left side.
folio
A folio usually indicates a large book size of 15" in height or larger when used in the context of a book description. Further,... [More]
First Edition
In book collecting, the first edition is the earliest published form of a book. A book may have more than one first edition in... [More]
device
Especially for older books, a printer's device refers to an identifying mark, also sometimes called a printer's mark, on the... [More]
verso
The page bound on the left side of a book, opposite to the recto page.