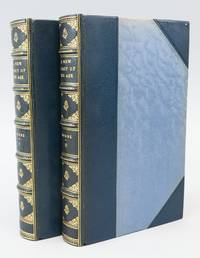 A NEW SPIRIT OF THE AGE

A NEW SPIRIT OF THE AGE

by (DICKENS, CHARLES and his contemporaries). HORNE, R. H., Editor

London: Smith, Elder and Co, 1844. FIRST EDITION. 200 x 124 mm. (7 7/8 x 4 7/8"). Two volumes. Very attractive contemporary cadet blue three-quarter morocco over pale blue watered silk, raised bands, spines handsomely gilt in compartments with floral sprig centerpiece and volute cornerpieces, marbled endpapers, top edges gilt. With 10 engraved portraits. Top inch of silk on one board faded by sun, one plate with closed one-inch fore-edge tear (not affecting image), other minor internal imperfections, but A VERY PRETTY SET, especially fresh and clean inside and out, and with bindings that are remarkably bright. Poet Richard Hengist Horne (1802-84) patterned this collection of critical essays about contemporary writers after the acclaimed collection of essays "Spirit of the Age; or Contemporary Portraits," published by his idol William Hazlitt in 1825. Among the writers included in the work were Dickens, the Brownings (Mrs. Browning is given credit for contributing at least one of the chapters), Mrs. Shelley, Wordsworth, Mrs. Trollope, Tennyson, and Hunt (there are 25 essays in all in the work, some of them dealing with more than one figure). Few were pleased by what they read; according to DNB, the book "elicited a deluge of abuse from its victims, and Horne, naïvely surprised, decamped hastily on a tour of Germany." Dickens, however, was either more forgiving or more flattered, and subsequently employed Horne as a reporter for the "Daily News," for which he covered the Irish famine in 1846, and later as a sub-editor of "Household Words." In any case, the work provides a useful survey of the period's literary scene, and our copy is in uncommonly handsome bindings.

morocco
Morocco is a style of leather book binding that is usually made with goatskin, as it is durable and easy to dye. (see also...[more]
gilt
The decorative application of gold or gold coloring to a portion of a book on the spine, edges of the text block, or an inlay in...[more]
First Edition
In book collecting, the first edition is the earliest published form of a book. A book may have more than one first edition in...[more]
raised band(s)
Raised bands refer to the ridges that protrude slightly from the spine on leather bound books.  The bands are created...[more]
plate
Full page illustration or photograph. Plates are printed separately from the text of the book, and bound in at production. I.e.,...[more]
edges
The collective of the top, fore and bottom edges of the text block of the book, being that part of the edges of the pages of a...[more]