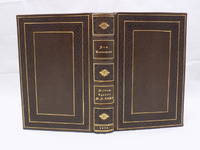 THE NEW TESTAMENT OF OUR LORD AND SAVIOUR JESUS CHRIST: PUBLISHED IN 1526. BEING THE FIRST TRANSLATION FROM THE GREEK INTO ENGLISH BY WILLIAM TYNDALE

THE NEW TESTAMENT OF OUR LORD AND SAVIOUR JESUS CHRIST: PUBLISHED IN 1526. BEING THE FIRST TRANSLATION FROM THE GREEK INTO ENGLISH BY WILLIAM TYNDALE

Condition
NEAR FINE =/NONE
Seller
ANCIENT WORDS EVER TRUE RARE BIBLES
Seller rating:
This seller has earned a 5 of 5 Stars rating from Biblio customers.
Jeff, Tennessee

PRINTED IN 1836-EXACTLY 300 YEARS AFTER THE 1536 TYNDALE NEW TESTAMENT BEING THE FIRST PRINTED IN ENGLAND ! PRINTED BY STEVENS AND PARDON FOR SAMUEL BAGSTER. *FIRST EDITION*

PRINTED DIRECTLY FROM TYNDALE'S 1526 HISTORIC PRINTING OF THE NEW TESTAMENT- THE VERY FIRST TIME THE SCRIPTURES WERE EVER PRINTED IN THE ENGLISH LANGUAGE !

THIS EXAMPLE IS IN RARELY SEEN PRISTINE CONDITION !

BOOKS OF THIS ERA WERE PRINTED ON ACIDIC WOOD PULP PAPER AND ARE USUALLY FOUND RIDDLED WITH FOXING THAT IS ABSENT HERE !!!

"Let it not make thee despair, neither yet discourage thee, O reader, that it is forbidden thee in pain of life and goods, or that it is made breaking of the king's peace, or treason unto his highness, to read the Word of thy soul's health—for if God be on our side, what matter maketh it who be against us, be they bishops, cardinals, popes."

William Tyndale could speak seven languages and was proficient in ancient Hebrew and Greek. He was a priest whose intellectual gifts and disciplined life could have taken him a long way in the church—had he not had one compulsion: to teach English men and women the good news of justification by faith.

Tyndale had discovered this doctrine when he read Erasmus's Greek edition of the New Testament. What better way to share this message with his countrymen than to put an English version of the New Testament into their hands? This, in fact, became Tyndale's life passion, aptly summed up in the words of his mentor, Erasmus: "Christ desires his mysteries to be published abroad as widely as possible. I would that [the Gospels and the epistles of Paul] were translated into all languages, of all Christian people, and that they might be read and known."

He was a native of Gloucester and began his studies at Oxford in 1510, later moving on to Cambridge. By 1523 his passion had been ignited; in that year he sought permission and funds from the bishop of London to translate the New Testament. The bishop denied his request, and further queries convinced Tyndale the project would not be welcomed anywhere in England.

To find a hospitable environment, he traveled to the free cities of Europe—Hamburg, Wittenberg, Cologne, and finally to the Lutheran city of Worms. There, in 1525, his New Testament emerged: the first translation from Greek into the English language. It was quickly smuggled into England, where it received a less-than-enthusiastic response from the authorities. King Henry VIII, Cardinal Wolsey, and Sir Thomas More, among others, were furious. It was, said More, "not worthy to be called Christ's testament, but either Tyndale's own testament or the testament of his master Antichrist."

Authorities bought up copies of the translation (which, ironically, only financed Tyndale's further work) and hatched plans to silence Tyndale.

Meanwhile Tyndale had moved to Antwerp, a city in which he was relatively free from both English agents and those of the Holy Roman (and Catholic) Empire. For nine years he managed with the help of friends to evade authorities, revise his New Testament, and begin translating the Old.

His translations, it would turn out, became decisive in the history of the English Bible, and of the English language. Nearly a century later, when translators of the Authorized, or King James Version, debated how to translate the original languages, eight of ten times, they agreed that Tyndale had it best to begin with.

During these years, Tyndale also gave himself methodically to good works because, as he said, "My part be not in Christ if mine heart be not to follow and live according as I teach." On Mondays he visited other religious refugees from England. On Saturdays he walked Antwerp's streets, seeking to minister to the poor. On Sundays he dined in merchants' homes, reading Scripture before and after dinner. The rest of the week he devoted to writing tracts and books and translating the Bible.

We do not know who planned and financed the plot that ended his life (whether English or continental authorities), but we do know it was carried out by Henry Phillips, a man who had been accused of robbing his father and of gambling himself into poverty. Phillips became Tyndale's guest at meals and soon was one of the few privileged to look at Tyndale's books and papers.

In May 1535, Phillips lured Tyndale away from the safety of his quarters and into the arms of soldiers. Tyndale was immediately taken to the Castle of Vilvorde, the great state prison of the Low Countries, and accused of heresy.

Trials for heresy in the Netherlands were in the hands of special commissioners of the Holy Roman Empire. It took months for the law to take its course. During this time, Tyndale had many hours to reflect on his own teachings, such as this passage from one of his tracts:

"Let it not make thee despair, neither yet discourage thee, O reader, that it is forbidden thee in pain of life and goods, or that it is made breaking of the king's peace, or treason unto his highness, to read the Word of thy soul's health—for if God be on our side, what matter maketh it who be against us, be they bishops, cardinals, popes."

Finally, in early August 1536, Tyndale was condemned as a heretic, degraded from the priesthood, and delivered to the secular authorities for punishment.

On Friday, October 6, after local officials took their seats, Tyndale was brought to the cross in the middle of the town square and given a chance to recant. That refused, he was given a moment to pray. English historian John Foxe said he cried out, "Lord, open the King of England's eyes!"

Then he was bound to the beam, and both an iron chain and a rope were put around his neck. Gunpowder was added to the brush and logs. At the signal of a local official, the executioner, standing behind Tyndale, quickly tightened the noose, strangling him. Then an official took up a lighted torch and handed it to the executioner, who set the wood ablaze.

THE NEWE TEFTAMENTE TITLE PAGE, 1 page, replica title features 9 of the apostles and Christ seated on his throne with the heavenly host gathered around, verso blank, NO staining, soiling, Very Nice, Perfect ! complete.

TO THE REDER, 3 pages, a final exhortation to the reader ,Very clean as above and perfect! , complete.

*** ABOUT THE BINDING ***RECENTLY AND BEAUTIFULLY REBOUND IN RICH BROWN FULL LEATHER. FEATURES FOUR RAISED CORDS CREATING A FIVE COMPARTMENTED SPINE WITH GOLD STAMPED MEDALLIONS AND BLIND STAMPED IVY, DUAL DATED 1836 WITH ARABIC NUMERALS AND 1526 WITH ROMAN NUMERALS IN GOLD BELOW THE WORDS NEW TESTAMENT AND WILLIAM TYNDALE . THE COVERS ARE ORNATELY DECORATED WITH DUAL FLORAL BORDERS THAT ARE LINED IN GOLD . LOVELY NEW MARBLED END PAPERS AND GOLD GILT TURN-INS COMPLETE THE RESTORATION VERY NICELY ! COULD BE USED AS A DAILY READER FREE FROM CONCERNS WITH PLENTY OF SHELF APPEAL ! INCLUDING LOVELY MARBLED END PAPERS AND GOLD GILT TURN INS !

*A WORD FROM THE CONSERVATOR* Many newer collectors often call into question the authenticity of our Bibles because of their outstanding , fine condition. As with any item of age, value is determined according to condition-condition-condition ! Each and every leaf is 181 years old and guaranteed authentic as intended by the original printer. It is NOT a replica, reproduction, facsimile, reprint or forgery. We strive hard to acquire only those Bibles which we would like to collect ourselves, preform any needed restoration work (in this case none was needed !) professionally to archival standards and present them to you free from concerns. There has been much discussion regarding the addition of this volume to our permanent collection ! Antiquarian Bibles continue to increase in value-In fact, they have done so at about ten percent per year over the last ten years making them a sensible addition to any portfolio .

30 day return guarantee, with full refund including original shipping costs for up to 30 days after delivery if an item arrives misdescribed. Postal damage must be reported upon delivery.

Seller rating:
This seller has earned a 5 of 5 Stars rating from Biblio customers.
Biblio.com member since: 2015
Jeff, Tennessee
Ask Seller a Question

We at Ancient Words Ever True Rare Bibles are full service antiquarian booksellers specializing in 16th and 17th century English Bibles and 18th and 19th century American Bibles since 2002.Our services include binding and paper conservation and restoration, chained and armored bindings, clasp, medallion and corner making from brass and sterling silver.

verso
The page bound on the left side of a book, opposite to the recto page.
marginalia
Marginalia, in brief, are notes written in the margins, or beside the text of a book by a previous owner.  This is very...[more]
gilt
The decorative application of gold or gold coloring to a portion of a book on the spine, edges of the text block, or an inlay in...[more]
spine
The outer portion of a book which covers the actual binding. The spine usually faces outward when a book is placed on a shelf....[more]
fine
A book in fine condition exhibits no flaws. A fine condition book closely approaches As New condition, but may lack the...[more]
Poor
A book with significant wear and faults. A poor condition book is still a reading copy with the full text still readable. Any...[more]
recto
The page on the right side of a book, with the term Verso used to describe the page on the left side.
facsimile
An exact copy of an original work. In books, it refers to a copy or reproduction, as accurate as possible, of an original...[more]
octavo
Another of the terms referring to page or book size, octavo refers to a standard printer's sheet folded four times, producing...[more]
plate
Full page illustration or photograph. Plates are printed separately from the text of the book, and bound in at production. I.e.,...[more]
rebound
A book in which the pages have been bound into a covering replacing the original covering issued by the publisher.
title page
A page at the front of a book which may contain the title of the book, any subtitles, the authors, contributors, editors, the...[more]
reprint
Any printing of a book which follows the original edition. By definition, a reprint is not a first edition.
New
A new book is a book previously not circulated to a buyer. Although a new book is typically free of any faults or defects,...[more]