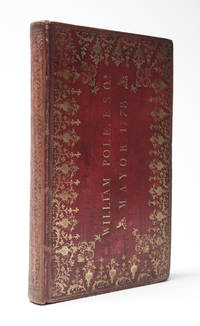 15. Book of Common Prayer (Oxford, 1793), early provenance indeterminate (Maggs Catalogue 1075, Part II no. 240. NB: in their description, Messrs. Maggs state that this binder was also responsible for the example published in their Catalogue 966 no. 191; I do not agree) Â

16. The present binding, executed in 1778 for William Pole, Esq. Mayor (of Liverpool from 1778-1779) dated 1778. Pole was Collector of Stamp Duties and Agent of the Sun Fire Office (a long biographical note appears in pencil on first blank leaf) -- subsequently in the library of noted Liverpool bibliophile and philanthropist Rev. S[amuel] A[shton] Thompson Yates (1843-1903), with his armorial bookplate. The names of early Liverpool bookbinders are few, but we have located two of them in Gore's 1766 "Liverpool Directory," namely Peter Wright (on Bixteth Street) and Richard Wright (on George Street). The work of the present binder was not within the scope of Ramsden's "Bookbinders of the United Kingdom (Outside London) 1780-1840. It would appear that the Wrights continued working in Liverpool for some time. According to Ramsden, the name Richard Wright appears in the 1777 and 1781 directories, and Peter Wright in the 1790 directory. In the 1793 records of burials at Our Lady and St Nicholas, Liverpool, a certain William Wright is listed as a bookbinder on Sweeting Street. Â

This edition of the Psalms is scarce: ESTC (T206585) lists only 5 copies worldwide, none in America.

gilt
The decorative application of gold or gold coloring to a portion of a book on the spine, edges of the text block, or an inlay in...[more]
bookplate
Highly sought after by some collectors, a book plate is an inscribed or decorative device that identifies the owner, or former...[more]
Cloth
"Cloth-bound" generally refers to a hardcover book with cloth covering the outside of the book covers. The cloth is stretched...[more]
New
A new book is a book previously not circulated to a buyer. Although a new book is typically free of any faults or defects,...[more]
morocco
Morocco is a style of leather book binding that is usually made with goatskin, as it is durable and easy to dye. (see also...[more]