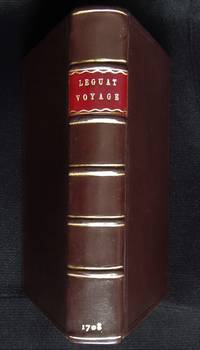 A New Voyage to the East-Indies

A New Voyage to the East-Indies: Containing their Adventures in two Desart Islands, And an Account of the most Remarkable Things in Maurice Island, Batavia, at the Cape of Good Hope, The Island of St Helena, and other places on their Way to and from the Desart Isles. Adorn’d with Maps

A New Voyage to the East - Indies by Francis Leguat and His Companions. Containing their Adventures in two Desart Islands, And an Account of the most Remarkable Things in Maurice Island, Batavia, at the Cape of Good Hope, The Island of St Helena, and other places on their Way to and from the Desart Isles. Adorn'd with Maps and Figures.
First UK edition. Printed for R. Bonwicke, W. Freeman, Tim.Goodwin, J. Walthoe, M. Wotton, S. Manship, J. Nicholson, B. Tooke, R. Parker, and R. Smith. London. 1708. Title page in red and black, (4) Dedication, xv (preface), 248, (22) index, (2) publisher's catalogue. 32 engraved maps and plates, 16 folding. Recent full calf, spine in six compartments with raised bands, gilt rules, red leather label and gilt lettering. Renewed endpapers. Text toned, occasional spotting. Plates bright. Short repaired closed marginal tear to 147/8. Folding memorial to Isaac Boyer plate (p104) replaced with a replica on period paper. François Leguat (1637 / 1639-1735) French explorer and naturalist. He was one of a small group of male French Protestant refugees who in 1691 settled on the then uninhabited island of Rodrigues in the western Indian Ocean. The colonists became discontented with their life on the island and after a stay of two years managed to escape to Mauritius in a small boat. Leguat arrived back in Europe in June 1698 and this work was published in 1708. Notably, Leguat describes several species of birds and tortoises that were endemic to Rodrigues but are now extinct

plate
Full page illustration or photograph. Plates are printed separately from the text of the book, and bound in at production. I.e.,...[more]
calf
Calf or calf hide is a common form of leather binding.  Calf binding is naturally a light brown but there are ways to treat...[more]
spine
The outer portion of a book which covers the actual binding. The spine usually faces outward when a book is placed on a shelf....[more]
title page
A page at the front of a book which may contain the title of the book, any subtitles, the authors, contributors, editors, the...[more]
New
A new book is a book previously not circulated to a buyer. Although a new book is typically free of any faults or defects,...[more]
raised band(s)
Raised bands refer to the ridges that protrude slightly from the spine on leather bound books.  The bands are created...[more]