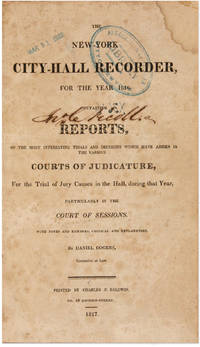 The New York City Hall Recorder, For the Year 1816, Containing..

The New York City Hall Recorder, For the Year 1816, Containing..

1817. [New York]: Printed by Charles N. Baldwin, 1817. [New York]: Printed by Charles N. Baldwin, 1817. A New York City Counterpart to the Newgate Calendar Rogers, Daniel, Reporter. The New-York City-Hall Recorder, For the Year 1816. Containing Reports, Of the Most Interesting Trials and Decisions Which Have Arisen in the Various Courts of Judicature, For the Trial of Jury Causes in the Hall, During that Year, Particularly in the Court of Sessions. With Notes and Remarks, Critical and Explanatory. [New York]: Printed by Charles N. Baldwin, 1817. iv, 204 pp. Twelve parts with continuous pagination and drop-head titles; first part preceded by general title page. Main text in parallel columns. Octavo (9" x 6"). Twentieth-century tan buckram, gilt title and library name to spine, endpapers renewed. Moderate toning, occasional light foxing, faint dampstaining to margins in a few places, early owner signature, two small later library stamps and minor dampstain to title page, early owner mark (?) to its verso. $750. * Published from 1817 to 1822 in monthly installments, The City-Hall Recorder was a digest of jury trials compiled in the manner of England's Newgate Calendar. Our volume contains the first full year of this publication, January-December 1816. It includes an index of cases and an index of topics. These cases deal with a remarkable range of subjects, such as bigamy, cock fights, slaves, idle children, vagrants and female criminals. Not in Cohen. Catalogue of the Library of the Harvard Law School (1909) II:487.

New
A new book is a book previously not circulated to a buyer. Although a new book is typically free of any faults or defects,... [More]
spine
The outer portion of a book which covers the actual binding. The spine usually faces outward when a book is placed on a shelf.... [More]
verso
The page bound on the left side of a book, opposite to the recto page.
buckram
A plain weave fabric normally made from cotton or linen which is stiffened with starch or other chemicals to cover the book... [More]
gilt
The decorative application of gold or gold coloring to a portion of a book on the spine, edges of the text block, or an inlay in... [More]
title page
A page at the front of a book which may contain the title of the book, any subtitles, the authors, contributors, editors, the... [More]
octavo
Another of the terms referring to page or book size, octavo refers to a standard printer's sheet folded four times, producing... [More]