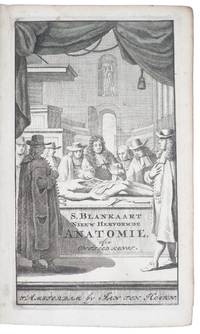 The Dutch pharmacist, physician, and anatomist Steven Blankaart (1650-1702) followed the mechanical school. He was an early empiricist and did important research on the capillary system. But is significance lies elsewhere: through his many books in the vernacular he helped disseminate and popularize medical knowledge previously reserved for well-educated Latin readers.

He teamed up with Jan ten Hoorn, a noted Amsterdam publisher of popular books, who spread Blankaart's work in handsome little 8vo's rather than costly folios. His Anatomie, first published in 1678, went through several editions and was available in Dutch, Latin, German and even English, serving as an indispensable reference tool for several decades.

Blankaart structured his Anatomie after the human bloodstream, starting with the anatomy of the heart, followed by the arteries, the lungs, the brain, the nervous system, the eyes, etc, ending with the bones and skin. Added at the end is an account of embalming, describing a method newly invented by Blankaart.

Very rare on the market.

vellum
Vellum is a sheet of specialty prepared skin of lamb, calf, or goat kid used for binding a book or for printing and writing. ...[more]
soiled
Generally refers to minor discoloration or staining.
spine
The outer portion of a book which covers the actual binding. The spine usually faces outward when a book is placed on a shelf....[more]