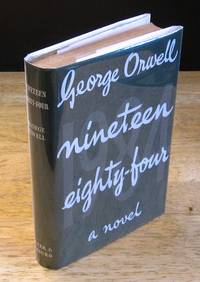 7 John Street, Bloomsbury, London : Martin Secker & Warburg, Limited, 1949. First edition, first printing published by Secker & Warburg of London. Stated at copyright: "First published 1949". Pallid green full cloth boards, red impressed spine titles, some sunning, discoloration. Pages very good, clean; no writing. Bind fine, moderate cant; hinges intact. Preserved in facsimile of the original first state dark green dust wrapper; protected in new clear sleeve. Rare good first edition with near fine pages in fine facsimile wrapper. Apparently, this very book is from the shelves of "Watership Down" author, Richard Adams. Rather large vintage bookplate inside cover illustrated by Jennifer Campbell whose designs feature in two of Adams' story and fable collections: "The Iron Wolf" and "The Unbroken Web". Pictorial plate depicts two white rabbits in chiarocura-like contrast, rushing through patterned forest in background: "Jennifer Campbell '78, ...running easily down, through the wood... Ex Libris, Richard Adams". Intriguing when considering the influence "1984", very possibly "Animal Farm" et al. had upon Adams and his intriguing novel of anthropomorphic rabbits. Richard Adams' unique novel has been described as an allegory exemplifying the struggles between tyranny and freedom, reason and blind emotion, and the individual as opposed to the automaton of a homogenized bureaucratic corporatized state. Adams utilizes classic themes of the hero and their quest in turn creating a tale of epic motifs. In a sense, "Watership Down" is an answer to "1984". Eric Arthur Blair (25 June 1903 - 21 January 1950) pseudonymously George Orwell, composed this narrative message in 1948 and juxtaposed the numbers to 1984 as its time and place. The novel was first published in 1949 and he would pass the following January of 1950 at the age of 46. 1984 is the year in which it happened! The world is divided into three great powers, Oceania, Eurasia, and Eastasia, each perpetually at war. Britain is part of Oceania and is known as Airstrip 1. Throughout Oceania, The Party rules through four ministries, whose power is absolute. The Ministry of Peace deals with war, the Ministry of Love, seat of the dreaded Thought Police, handles 'law and order,' the Ministry of Plenty deals in scarcities, and the Ministry of Truth doles out the propaganda. 'New-speak' is the 'modern' perversion of language ordained by the Party. It has installed such remarkable words as double-think (duplicitousness), thought-crime, and sex-crime or 'love' in standard English. In every room, a tele-screen is installed, which can never be switched off, and where 'authorities' spy on every action, word, gesture, and thought. On every hoarding a huge face is displayed - the face of Big Brother! Set within this nightmare is the drama of Winston Smith, possibly the last man alive to rebel against the Party's rule and doctrine, clinging to the belief in the individual and in those precious human feelings and values. With flawless craftsmanship, ingenuity and narrative power Mr. Orwell lays out a terrifying potential future. The love of Winston for the amorous and independent Julia, and the fate that befalls them, stirs the reader's emotions as the cautionary tale paces to a tremendous climax. When Mr. Orwell's 'Animal Farm' was published three years prior, critics hailed him as a new Jonathan Swift. The satirical passages in '1984' justify the critics' verdict. But, presented here is much more than satire. Bertrand Russell writes in summary at front flap: "...1984 depicts with great power the horrors of a totalitarian regime. It is important the western world is aware of these dangers, and not only in the narrow form of (Communist) Russia. Mr. Orwell contributes to this important purpose with skill and a force of imagination. I hope it will be widely read." Printed in Great Britain by the Alcuin Press, Welwyn Garden City, and bound by Key & Whiting, Ltd., London. 312 pages. Insured post.. First Edition. Hard Cover. Good/Fine. Illus. by Kennar, Michael (Wrapper Design). 12mo - over 6¾" - 7¾" tall. Book.

first state
used in book collecting to refer to a book from the earliest run of a first edition, generally distinguished by a change in some... [More]
fine
A book in fine condition exhibits no flaws. A fine condition book closely approaches As New condition, but may lack the... [More]
New
A new book is a book previously not circulated to a buyer. Although a new book is typically free of any faults or defects,... [More]
facsimile
An exact copy of an original work. In books, it refers to a copy or reproduction, as accurate as possible, of an original... [More]
12mo
A duodecimo is a book approximately 7 by 4.5 inches in size, or similar in size to a contemporary mass market paperback.... [More]
spine
The outer portion of a book which covers the actual binding. The spine usually faces outward when a book is placed on a shelf.... [More]
bookplate
Highly sought after by some collectors, a book plate is an inscribed or decorative device that identifies the owner, or former... [More]
Cloth
"Cloth-bound" generally refers to a hardcover book with cloth covering the outside of the book covers. The cloth is stretched... [More]
First Edition
In book collecting, the first edition is the earliest published form of a book. A book may have more than one first edition in... [More]
plate
Full page illustration or photograph. Plates are printed separately from the text of the book, and bound in at production. I.e.,... [More]