Home rare books Buddhism More Rare Books from Artem / Rare Books A note on Boodhism and the cave temples of India, addressed to F. Mouat, Esq. Member of the Asiatic Society of… 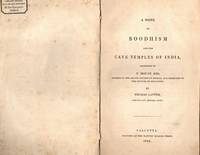 A note on Boodhism and the cave temples of India, addressed to F. Mouat, Esq. Member of the Asiatic Society of Bengal, and secretary to the Council of Education.

A note on Boodhism and the cave temples of India, addressed to F. Mouat, Esq. Member of the Asiatic Society of Bengal, and secretary to the Council of Education.

A rare treatise on the origins of Buddhism, based on the recent British discovery of the ancient Buddhist Ajanta Caves in India by officers of the East India Company. The caves date from the 2nd century BC and are a Unesco World Heritage site since 1983. They are considered India's greatest ancient Buddhist heritage. This work is a testament to the growing understanding of Buddhism and one of the earliest Western mentions of the Ajanta Caves. The Western discovery of the ancient Buddhist cave temples brought new light to the knowledge of how old Buddhism really was and how it was related to Western culture. The caves and its art turned out to be much much older than Western scholars considered Indian culture to be. Based on this new understanding, the author of the present treatise traces the origin of Indian people back to the ancient Egyptians and Ethiopians, who also dwelled in caves. According to him "there was in very antient times a very intimate connection between Aethiopia and India". According to Latter, all other cultures also stemmed from Ethiopia. At the end the author pleads for copies to be made of the wall paintings that were found in the caves because they were quickly deteriorating. In the same year such copies were indeed made, and were being removed and taken to England. Later these copies were destroyed in a fire in London and the originals have been lost. The author, Thomas Latter, was an officer for the East India Company who became interested in Burmese culture and published a number of works on Burmese language in particular. His best known work is A Grammar of the language of Burmah (Calcutta, 1845). He dedicated the present work to Frederic John Mouat (1816-1897), who was specialized in the Urdu language of South India. The present work was printed by the Baptist Mission Press at Calcutta and very few copies survive, we traced 4 records of physical copies in libraries worldwide.

Condition: annotations in grey and blue pencil on front cover and underlining in the text. Covers slightly soiled. Book label of Ernest Leroux, bookseller to the Asiatic Society of Paris.

Reference: Catalogue of the Books and Maps in the Library of the Asiatic Society of Bengal, p. 135, no. 1587.

Seller rating:
This seller has earned a 5 of 5 Stars rating from Biblio customers.
Biblio.com member since 2021
The Hague
Ask Seller a Question

soiled
Generally refers to minor discoloration or staining.
New
A new book is a book previously not circulated to a buyer. Although a new book is typically free of any faults or defects,... [More]