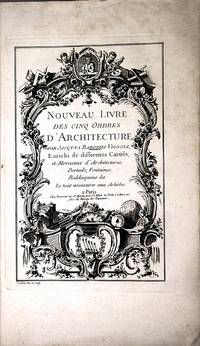 This publication on architecture and ornaments after the original Italian edition of 1562 is a French version of that work with examples of French buildings, designed after Vignola's architecture canon.

The Italian architect Giacomo Barozzi [1507 - 1573] was born in Vignola and therefore usually simply called Vignola. He was one of the greatest architects of all times and one of the most important designers of the Italian Renaissance (Mannerism) architecture. He worked a few years for Francois I of France and later in Rome for pope Julius III. In Rome, he worked with Michelangelo and directed the building of the St Peter's Basilica after Michelangelo had died. He also built/revised the Palazzo Farnese in Piacenza and the Villa Farnese at Caprarola.

Vignola wrote two works on architecture, that have become classics in their field. The first and most influential one, "Regola delli cinque ordini d'architettura", was published in 1562 and the other one, "Due regole della prospettiva pratica" was published posthumously in 1583. The first treatise has been published in many editions in the subsequent centuries. It was especially important, apart from the information on architectural subjects, for its many details on ornamentation.

The present work contains 44 engravings on architectureal subjects, as well as an engraved ornamental title-page. The engravings depict a.o. the elements of the classical Greek style, examples of different styles of porticos, pedestals, friezes and capitals. The last 11 engravings provide plans and views of different buildings as well as ornamental examples of baldachins, galleries and altars. This last section provides examples of French architecture, a.o. views of two Parisian churches (St Sulpice and St Eustache) and two Parisian buildings (the Louvre and the palace of Madame de Pompadour).

The title and the first 32 engavings have been made by Poulleau whereas the last 12 ones have been cut by Le Canu. On Poulleau see: Basan, Dictionn. Graveurs Anc. Modern, (1789, second edition), II, p 109. Engravings by Le Canu have been included into Diderot's Encyclopedie.

Seller rating:
This seller has earned a 5 of 5 Stars rating from Biblio customers.
Biblio.com member since 2020
De Bilt
Ask Seller a Question

spine
The outer portion of a book which covers the actual binding. The spine usually faces outward when a book is placed on a shelf.... [More]
wrappers
The paper covering on the outside of a paperback.  Also see the entry for pictorial wraps, color illustrated coverings for... [More]
leaves
Very generally, "leaves" refers to the pages of a book, as in the common phrase, "loose-leaf pages." A leaf is a single sheet... [More]
fine
A book in fine condition exhibits no flaws. A fine condition book closely approaches As New condition, but may lack the... [More]