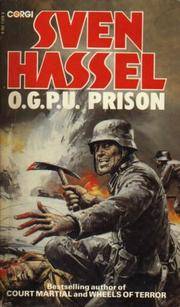 O.G.P.U. PRISON. [Translated from the Danish by Tim Bowie.]

O.G.P.U. PRISON. [Translated from the Danish by Tim Bowie.]

UK,12mo p/back,1st edn.VG+. No owner inscrptn and no price removal from cover.Bright,crisp,clean,sharp-cornered,glossy,vibrant colour pictorial artwork to covers - spine inevitably and ubiquitously sunned with reading creases - front cover with red+white letters,white letters to rear cover.Negligible shelf-wear,bumping,creasing to edges and corners - no nicks,tears or splits present.All edges aged/toned and all with some minimal sporadic spotting; contents tight and clean with minimal page-edge toning - no dog-ear reading creases to any pages' corners.UK,12mo p/back,1st edn,11-350pp [paginated] includes 8 chapters; plus [unpaginated] toned and lightly foxed,front free endpaper with story preamble,title page,contents list,a dedication,story character's quotation,Wilfred Owen prose extract,and to reverse of last page of story,publisher's advert and order form.
It stood on the top of the hill,dominating the Russian landscape - menacing and impenetrable - the O.G.P.U Prison.Although they had no tanks to protect them,Porta and his fellow fighters were told to take it in any way they could—with machine guns,flamethrowers,entrenching tools,their bare hands if need be.But although they were used to war,to blood,death,and the vilest savagery that man could devise. . . But the O.G.P.U. Prison was something different - a hell they hadn't encountered before. . , , a bastion,an inferno that rained blood and butchery on Porta,the Legionnaire,Tiny,Barcelona and the men of the Panzer battalion who no longer had tanks. . .only a creeping barrage of death.
Born in 1917 in Fredensborg,Denmark,Sven Hassel joined the merchant navy at the age of 14.He did his compulsory year's military service in the Danish forces in 1936 and then,facing unemployment, joined the German army.He served throughout the Second World War on all fronts except North Africa.When the war ended in 1945 he was transferred between Russian,American and French prison camps,and upon returning to Denmark,was sentenced to 10 years in prison for treason.He began writing 'LEGION OF THE DAMNED' during his time as a prisoner of war.
His 14 Second World War books,which draw on his own encounters and experiences as a soldier,have sold over 53 million copies worldwide and have been published in more than 50 countries.He peacefully passed away in Barcelona in 2012,where he had resided since 1964.
Please contact seller @ rpaxtonden@blueyonder.co.uk ,because of the lighter weight of this item for correct shipping/P+p quotes - particularly ALL overseas customers - BEFORE ordering through the order page!
** N.B. UK,buyers please note,p/backs' actual shipping/P+p costs are adjusted and any difference is refunded,after order receipt and before the order's despatch,especially if p/back is offered P+p free.
*This item offered P+p FREE - available UK only. ** N.B. US customers please be aware: US standard AIR postage from UK to US can now cost more than the price of the book! If speed is not of the essence,then Economy rate is recommended - at approx. 1/2 to 2/3rds of standard US AIR quote/rate - sometimes arriving long before the quoted 42 days - but not always.

edges
The collective of the top, fore and bottom edges of the text block of the book, being that part of the edges of the pages of a...[more]
tight
Used to mean that the binding of a book has not been overly loosened by frequent use.
sunned
Damage done to a book cover or dust jacket caused by exposure to direct sunlight.  Very strong fluorescent light can cause...[more]
spine
The outer portion of a book which covers the actual binding. The spine usually faces outward when a book is placed on a shelf....[more]
foxed
Foxing is the age related browning, or brown-yellowish spots, that can occur to book paper over time. When this aging process...[more]