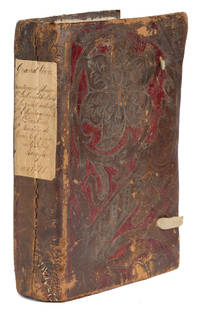 1718. [Grand St.Bernard] [c.1718]. [Grand St.Bernard] [c.1718]. Restoring Discipline in the Augustinian Community of Grand Saint Bernard [Manuscript]. Boniface, Louis. [Hospice de Grand Saint Bernard]. Opuscula Nonnulla R. Ludovici Bonifacii Canonici Regularis Coadiutoris ad Salutiferam Regularis Disciplinae Restitutionem. Sparsim Adiunctis Postea Latis a Sacra Episcoporum & Regularium Congegatione Decretis 1718. [Grand-St.-Bernard, c.1718]. 304 ff. Quarto (9-1/2" x 7"). Contemporary morocco with decorate blind stamping, stitched down center of spine, which has an early hand-lettered title panel, fragments of thong ties, untrimmed edges. Light rubbing to boards, somewhat heavier rubbing to extremities, early repair to foot of spine. Light toning to interior, text in neat hand, a few laid-in notes. A handsome item. $5,000. * This is a collection of canon law writings by Louis Boniface, intended (so the title-page states) to restore discipline at the famous Augustinian community of Grand Saint Bernard in the Swiss Alps, where the author was coadjutor and provost. We understand it to be an official report, later distributed as manuscript copies, which was presented at a synodical meeting of 1718. Much of the study concerns money and property. Other subjects include the officers of the community and a ban on women servants. Showing its high status as a report, other copies are found in the Grand-Saint-Bernard archives. Our copy has a remarkable binding featuring blind-stamped floral designs with red-painted inlay. It was probably made from a wall hanging or wallpaper. The archive of Grand Saint-Bernard has a copy of Boniface's baptism certificate (1664) and several of his papers, which include works on cosmography, geography and history, and a thirty-year travel diary. The archives of Grand Saint Bernard record four other manuscripts with the same author, title and date (AGSB 5056, 5057, 5058, 4049). We located no other copies. (On Boniface in the archives see http://www.aasm.ch/fonds/agsb/static/5314.html and http://www.aasm.ch/fonds/agsb/static/5040.html).

laid-in
"Laid In" indicates that there is something which is included with, but not attached to the book, such as a sheet of paper. The... [More]
spine
The outer portion of a book which covers the actual binding. The spine usually faces outward when a book is placed on a shelf.... [More]
quarto
The term quarto is used to describe a page or book size. A printed sheet is made with four pages of text on each side, and the... [More]
edges
The collective of the top, fore and bottom edges of the text block of the book, being that part of the edges of the pages of a... [More]
rubbing
Abrasion or wear to the surface. Usually used in reference to a book's boards or dust-jacket.
morocco
Morocco is a style of leather book binding that is usually made with goatskin, as it is durable and easy to dye. (see also... [More]