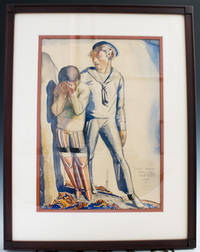 1935. Kent, Rockwell. Measuring 13 by 9 1/4 inches, this watercolor bears Kent's signature along with the inscription, "to his friend Charly Mortensen, 1935." Mortensen was the telegraph operator aboard the Hans Egede, the ship on which Kent made two of his three celebrated voyages to Igdlorssuit, Greenland, where he would live off and on between 1929 and 1935. His life and work among the native Greenlanders during these years resulted in two of his greatest books: Greenland Journal and Salamina. The present painting, a moving, somber work executed in the artist's typically realistic style, depicts a European sailor, presumably preparing to depart Greenland for home, comforting a native Greenlander who is weeping into her hands at the prospect of their parting. The watercolor is accompanied by Mortensen's autograph book, which contains numerous drawings and inscriptions by friends and Hans Egede passengers, including two drawings by Kent, both signed. One drawing, a charming, informal pen and ink scene of the Hans Egede en route from New York to Greenland under a starry sky, bears an inscription by Kent thanking Mortensen for being a "considerate and obliging friend." The other item, a landscape, appears to use a combination of pen and ink and watercolor, and is inscribed by Kent, "This is a genuine drawing by me -- only drawn all over again and much improved by Mortensen (fair wireless operator, better artist, and best of fellows). Sworn to this day, July 3rd 1935, by Rockwell Kent ... so help me God!" Mortensen's replicated drawing does not appear in the book, although another of his drawings does: a depiction of a native Greenlander, signed "CM after RK," apparently meaning the piece was executed by Mortensen in the style of Kent. Of further interest is a drawing contributed by Kent's teenaged son, Gordon, who accompanied his father on one of the Greenland excursions. Bound in full red leather, which shows some cracking and general wear, the book is a unique item that offers an intimate glimpse into a key period in the life of one of the most important illustrators of the twentieth century. Laid in are seven black and white photographs, including one of the Hans Egede docked at Igdlorssuit, where it has been met by native Greenlanders in sleds and canoes. Watercolor double-matted and in a handsome Art Deco-style cherry frame. (Johnson, Fridolf. Rockwell Kent: An Anthology of His Work, pp. 161-179).

New
A new book is a book previously not circulated to a buyer. Although a new book is typically free of any faults or defects,...[more]
inscribed
When a book is described as being inscribed, it indicates that a short note written by the author or a previous owner has...[more]