Home R. J. A. PAXTON-DENNY. OVER THE BATTLEFIELD: OPERATION EPSOM. 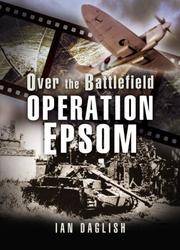 OVER THE BATTLEFIELD: OPERATION EPSOM.

OVER THE BATTLEFIELD: OPERATION EPSOM.

UK,8vo HB+dw/dj,1st edn.FINE+/FINE.No owner inscrptn and no price- clip to dw/dj - as new - wrapped and protected from day of issue/ purchase.Bright,crisp,clean,matt,colour+monochrome montage'd photographic illustrated front panel of dw/dj,with white+grey lettering,rear panel with monochrome aerial photograph; with negligible shelf-wear and creasing to edges and corners - no nicks or tears present.Top+fore- edges bright and clean; contents bright,tight,clean - pristine - no dog- ear reading creases to any pages' corners,appears unread - apart from my own collation.Bright,crisp,clean,sharp-cornered,publisher's original, plain black cloth boards with bright,crisp,stamped gilt letters to spine/ backstrip and immaculate plain white endpapers.UK,8vo HB+dw/dj,1st edn,6- 272pp [paginated] includes acknowledgements,author's introduction,10 chapters,profuse contemporary b/w photographs,b/w maps+illus all interspersed throughout the text and the book,appendices I-X,a bibliography and an index; plus [unpaginated] half-title+title pages, and contents list/table . 'Operation EPSOM',the first of Montgomery's major set-piece Normandy battles,marked a turning point in the Normandy campaign.Before 'EPSOM',there remained the chance that a German counter-strike in Normandy might seriously threaten the bridgehead.After 'EPSOM',the Allies retained the strategic initiative through to the liberation of France and Belgium.This was a battle in which highly trained but largely inexperienced British 'follow-up' divisions,newly arrived in Normandy, confronted some of the best equipped,best led and most experienced combat formations of the Third Reich.Beginning with a set-piece British assault on the Germans in dense terrain,the battle developed into a swirling armoured action on the open slopes of Hills 112 and 113,before the British Army grimly turned to defending their gains in the face of attacks by two SS-Panzer Korps.This entirely new study brings together previously unseen evidence to present an important Normandy battle in great detail.The unfolding action is illustrated using aerial photography of the battlefield and period Army maps.Supporting appendices offer vital background information including detailed orders of battle,analysis of tactics and lessons learned by both sides.
What else is so special about this book,is the discovery and use of superb aerial photos taken during the fighting by the RAF and period b/w maps.This imagery makes it possible to trace the course of the battle and to track the movement of the armoured regiments and troops of both sides.The effect is stunning and the reader is able to follow history in the making. Since April 2013,again in March 2015,and in this year too,the UK Post Office has altered it's Pricing in Proportion template,altering its prices,weight allowances,dimensions and lowered its qualifying compensation rates too! So,please contact rpaxtonden@blueyonder.co.uk ,because of the value of this item,for correct,insured shipping/P+p quotes - particularly ALL overseas buyers - BEFORE ordering through the order page!

Cloth
"Cloth-bound" generally refers to a hardcover book with cloth covering the outside of the book covers. The cloth is stretched...[more]
edges
The collective of the top, fore and bottom edges of the text block of the book, being that part of the edges of the pages of a...[more]
gilt
The decorative application of gold or gold coloring to a portion of a book on the spine, edges of the text block, or an inlay in...[more]
New
A new book is a book previously not circulated to a buyer. Although a new book is typically free of any faults or defects,...[more]