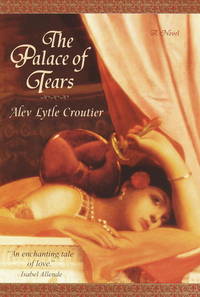 The Palace of Tears

The Palace of Tears

New York: Delacorte, 2000 "On a balmy autumn afternoon in Paris, in the year 1868, young winemaker Casimir de Chateauneuf wanders through the hollow arcades of the Palais Royal. Browsing in a small shop filled with curiosities from the Orient, he spies a cache of fine miniature portraits. Above all others, an ivory-skinned beauty captivates him. Her eyes--one blue, the other yellow. That night they pursue Casimir in his dreams, as one burning question consumes him: Who is she? Thus begins Casimir's dizzying quest for the object of his obsession. Forsaking his family, his vocation, his country, Casimir sails from Marseilles to North Africa, plunging into a strange new world with blind faith in destiny. His journey leads him to Istanbul, "city of the world's desire." There, in a deserted palace of the former sultan, is hidden the woman of his reveries, the woman with one blue eye, the other yellow. To touch her is forbidden. But in this city of passion, in a Palace of Tears, Casimir is about to discover what it will mean to make a dream real.and what awaits him when his lover is set free. Filled with breathtaking visions -- from the lavish courts of the Second Empire in France to a boat ride along the Bosphorus, from a sultan's hushed harem to two lovers locked in a long night of passion -- The Palace of Tears is an epic adventure of the heart, as enthralling as a romantic opera, as tantalizing as The Arabian Nights, a lush and hypnotic meditation on the forces of history, fate, and love." SBN: Publisher: Delacorte Press, New York, NY, U.S.A. Publication Date: 2000 Binding: Hard Cover Book Condition: As New Dust Jacket Condition: As New Signed: Signed by Author Edition: First Edition. ARC/Advance Reading Copy.. Soft Cover. Fine.

Alev Croutier was born in Turkey. She has written and directed award-winning independent films and was awarded a Guggenheim Fellowship (the first ever for a screenplay) for her work on Tell Me a Riddle . She is the author of the internationally acclaimed bestseller Harem: The World Behind the Veil . She divides her time between San Francisco and Paris.

All books are carefully described. If the book you receive does not match,then please contact Kalamos Books, so we can address the problem. We can accept payments (Cash, Cheques, Postal Orders and International Money Orders)in your choice of the following currencies - CAN $, US$, UK Pounds and Euros - enquire for quotes at the current rate of exchange.

Seller rating:
This seller has earned a 5 of 5 Stars rating from Biblio customers.
Biblio.com member since: 2004
STREETSVILLE, Ontario
Ask Seller a Question

Kalamos Books specializes in Books about Greece (Ancient,Byzantine and particularly Modern Greece) and also books about the Balkans & Ottoman Turkey. As well there is a wide selection of Fiction including stories set in Greece, or by Greek authors, as well as historical novels. We can special order books from Greece and handle library purchase orders for books in Greek. In addition we have interesting travel books about other countries, and have some Canadiana and popular fiction.Ask about antique maps and prints and vintage postcards of Greece.

fine
A book in fine condition exhibits no flaws. A fine condition book closely approaches As New condition, but may lack the...[more]
miniature
A book that is less then 3 inches in width and ...[more]
reading copy
Indicates a book that is perfectly serviceable for reading. It may have a defect or damage. As such, reading copy is not...[more]
jacket
Sometimes used as another term for dust jacket, a protective and often decorative wrapper, usually made of paper which wraps...[more]
First Edition
In book collecting, the first edition is the earliest published form of a book. A book may have more than one first edition in...[more]