Join us October 7–16, 2022 for our upcoming virtual antiquarian book fair!
Preregister now for Biblio.live and get $10 to use at the fair.
Home Rare Books General Transportation More rare books from Aardvark Books / Ezra The Bookfinder, ABAA/IOBA PATERSON'S ROADS: A NEW AND ACCURATE DESCRIPTION OF ALL THE DIRECT AND PRINCIPAL CROSS ROADS IN ENGLAND AND… 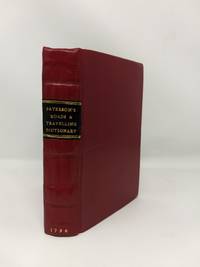 PATERSON'S ROADS: A NEW AND ACCURATE DESCRIPTION OF ALL THE DIRECT AND PRINCIPAL CROSS ROADS IN ENGLAND AND WALES. (Bound With) A TRAVELING DICTIONARY ; Bound With A TRAVELLING DICTIONARY, or, Alphabetical Tables of the Distance of All the Principal Cities, Borough, Market and Sea-Port Towns in Great Britain, From Each Other

PATERSON'S ROADS: A NEW AND ACCURATE DESCRIPTION OF ALL THE DIRECT AND PRINCIPAL CROSS ROADS IN ENGLAND AND WALES. (Bound With) A TRAVELING DICTIONARY ; Bound With A TRAVELLING DICTIONARY, or, Alphabetical Tables of the Distance of All the Principal Cities, Borough, Market and Sea-Port Towns in Great Britain, From Each Other

LONDON: T.N. Longman, 1796. Hardcover. NEAR FINE. Two separate books in one binding. The first book of this is the Eleventh Edition of what is commonly called PATERSON'S ROADS and was an indispensable resource which all coachmen carried to find their way through the towns, hills, dales and shires. 406 pp. includes index to County Seats. Later binding of rich vermilion calf, with raised bands, contrasting black spine label with gilt-stamped title and date. Marbled endpapers.Tight, bright copy.

Bound together with the Seventh Edition of THE TRAVELLER'S DICTIONARY, consisting of 215 pp., and published in 1797.

Eighteenth-Century editions are quite scarce. In the preface, the publishers thusly describe the companion volume to this single-bound volume, called The Traveling Dictionary: "Having thus, to the best of our Abilities, supplied the Traveller with a full and accurate Description of a much greater Collection of Roads than was ever before attempted; yet, as the different Routs which Travellers may have Occasion to take are almost infinite, and consequently not comprisable in a Volume of this Size, we have, in order to complete our Plan, compiled, and published separatelly, a Second Part to this Work...By these Tables, the Traveller will find the Compass he must make to visit any Place or Places which he may be desirous of taking in the Course of his Journey, and will likewise be enabled, at setting out, to form an Estimate of his Time and Expence, by ascertaining the Number of Miles he must travel, with the greatest Exactness, should the Tour he proposes to make be ever so much about, or irregular..."

Further, the author adds: "the two bound together make a complete Travelling Companion"... "...When the Travelling Dictionary is bound up with this, Then the Distances between any two Places (London not being one of them) follow the Index to the Gentlemen's Seats; and, at the End of them, are the Distances of the several Towns and Bridges upon the River Thames, from London Bridge, and from each other, by Water."

Daniel Paterson was the Assistant to George Morrison (to which the book is dedicated), the Quarter-Master-General of his Majesty's Forces.

I. An Alphabetical List of all the Cities, Towns and remarkable Villages; with their Market-Days, and the Counties in which they are situated.

II. The Direct Roads from London to all the Cities, Borough, Market, and Sea-Port, Towns; shewing the Distance from each City, Town, or Village, to the next on the same Road; with their Distance from London, and an Account of the Remarkable Seats that are near the Road.

III. The Cross Roads of England and Wales.

IV. The Circuits of the Judges in England.

V. An Index to the Country Seats.

VI. A Post-Table, in French and English, showing instantly, without the Trouble of calculating, the Expence of travelling any Stage, with Post-Chaises and Saddle-Horses.

The Whole on a Plan entirely New, and far preferable to any Work of the Kind extant.

(US)
Bookseller's Inventory #
64419
Title
PATERSON'S ROADS: A NEW AND ACCURATE DESCRIPTION OF ALL THE DIRECT AND PRINCIPAL CROSS ROADS IN ENGLAND AND WALES. (Bound With) A TRAVELING DICTIONARY ; Bound With A TRAVELLING DICTIONARY, or, Alphabetical Tables of the Distance of All the Principal Cities, Borough, Market and Sea-Port Towns in Great Britain, From Each Other
Author
Paterson, Daniel
Format/Binding
Hardcover
Book condition
Used - NEAR FINE
Quantity-available
1
Binding
Hardcover
Publisher
T.N. Longman
Place of Publication
LONDON
Date Published
1796
Keywords
Coaching Maps of England; Road Map of 18th Century Great-Britain; Early British Travel Guides; COACHING AND DRIVING, History of British roads

Returns Policy: 30 Day Returns, with prior approval, in same condition as when shipped.

Seller rating:
This seller has earned a 5 of 5 Stars rating from Biblio customers.
Biblio.com member since 2004
Eugene, Oregon
Ask Seller a Question

calf
Calf or calf hide is a common form of leather binding. Calf binding is naturally a light brown but there are ways to treat the... [More]
raised band(s)
Raised bands refer to the ridges that protrude slightly from the spine on leather bound books. The bands are created in the... [More]
fine
A book in fine condition exhibits no flaws. A fine condition book closely approaches As New condition, but may lack the... [More]
New
A new book is a book previously not circulated to a buyer. Although a new book is typically free of any faults or defects, "new"... [More]
spine label
The paper or leather descriptive tag attached to the spine of the book, most commonly providing the title and author of the... [More]