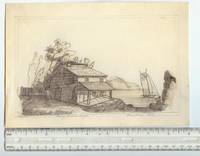 This is an outstanding pencil drawing of a young Fanny Ruschenberger that not only had a fine pen writing hand at the age of 10 but also had the budding artist's eye. The figure of the man, smoking a pipe and looking out at the harbor at the sail boat was her father. The work is simply stunning. Fanny Ruschenberger born May 27, 1844 died March 3, 1883. She wrote six diaries. The manuscript diary of Fanny Ruschenberger 1858-1881 is located at the University of Pennsylvania. Fanny Ruschenberger of Philadelphia was the daughter of a prominent Philadelphia physician, William Samuel Ruschenberger (1807-1895); she was an unmarried sewing teacher. Volume 1 of her diaries is a copybook record of church attendance, family visits and activities, social and cultural events, local and regional trips, and her teaching experience. Her diary and works are considered to be an important window into the social lives of the times. Dr. William Samuel Waithman Ruschenberger (4 September 1807 in Cumberland County, New Jersey – 24 March 1895 in Philadelphia, Pennsylvania) was a surgeon for the United States Navy and an author.

Biography of her father:

After attending schools in Philadelphia and New York he entered the Navy as surgeon's mate, 10 August 1826. He was graduated in medicine at the University of Pennsylvania in 1830, and was commissioned surgeon, 4 April 1831. He was fleet surgeon of the East India Squadron 1835–1837, attached to the naval rendezvous at Philadelphia 1840–1842, and at the naval hospital in Brooklyn 1843–1847, when he organized the laboratory for supplying the service with unadulterated drugs. He was again fleet surgeon of the East India Squadron 1847–1850, of the Pacific Squadron 1854–1857, and of the Mediterranean Squadron from August 1860 until July 1861. During the intervals between cruises he was on duty at Philadelphia. During the Civil War he was surgeon of the Boston Navy Yard. He was on special duty at Philadelphia 1865–1870, was the senior officer in the medical corps 1866–1869, and was retired on 4 September 1869. He was president of the Academy of Natural Sciences of Philadelphia 1870–1882, and president of the College of Physicians of Philadelphia 1879–1883. He was commissioned medical director on the retired list on 3 March 1871. Dr. Ruschenberger published some of the results of his investigations during his cruises, by which he had acquired a wide reputation.

He also served as a member of the Board of Appointments whose purpose was to form rules and plans for the United States Naval Academy. Dr. Ruschenberger rose to the rank of commodore before he retired.

Elements of herpetology, and of ichthyology (with Henri Milne-Edwards and Achille Comté; 1844)

A Notice of the Origin, Progress, and Present Condition of the Academy of Natural Sciences of Philadelphia (1852)

Notes and Commentaries during Voyages to Brazil and China, 1848 (Richmond, 1854)

He also published numerous articles on naval rank and organization (1845–1850), and contributed papers to medical and scientific journals. He edited the American edition of Mrs. Somerville's Physical Geography, with additions and a glossary (1850; new ed., 1853).

fine
A book in fine condition exhibits no flaws. A fine condition book closely approaches As New condition, but may lack the...[more]
New
A new book is a book previously not circulated to a buyer. Although a new book is typically free of any faults or defects,...[more]