Home > Excelsa Scripta Rare Books > A MAN OF THE PEOPLE 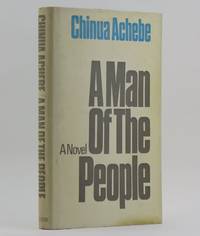 A MAN OF THE PEOPLE

A MAN OF THE PEOPLE

Things Fall Apart is a 1958 English-language novel by Nigerian author Chinua Achebe. It is a staple book in schools throughout Africa and widely read and studied in English-speaking countries around the world. It is seen as the archetypal modern African novel in English, and one of the first African novels written in English to receive global critical acclaim. The title of the novel comes from William Butler Yeats' poem "The Second Coming".

Contact is encouraged. Additional photos are provided upon request. Books are carefully examined. Payment accepted by the Biblio eCommerce system.

Seller rating:
This seller has earned a 5 of 5 Stars rating from Biblio customers.
Biblio.com member since: 2012
Hastings on Hudson, New York
Ask Seller a Question

Welcome to Excelsa Scripta Rare Books for a fine selection of antiquarian books on social thought and inspirational ideas. My priorities are professionalism, truth in advertising, accountability, and five-star customer care. Member of the Antiquarian Booksellers' Association of America and the International League of Antiquarian Booksellers, I am proud to meet the requirements of their Codes of Ethics. With a master of Architecture from Columbia University, my previous experience dovetails well with my career as a professional bookseller. Architects are professional, discerning and interactive entrepreneurs with respect for history.

jacket
Sometimes used as another term for dust jacket, a protective and often decorative wrapper, usually made of paper which wraps...[more]
First Edition
In book collecting, the first edition is the earliest published form of a book. A book may have more than one first edition in...[more]
edges
The collective of the top, fore and bottom edges of the text block of the book, being that part of the edges of the pages of a...[more]
soiled
Generally refers to minor discoloration or staining.
tight
Used to mean that the binding of a book has not been overly loosened by frequent use.
spine
The outer portion of a book which covers the actual binding. The spine usually faces outward when a book is placed on a shelf....[more]
foxed
Foxing is the age related browning, or brown-yellowish spots, that can occur to book paper over time. When this aging process...[more]
leaves
Very generally, "leaves" refers to the pages of a book, as in the common phrase, "loose-leaf pages." A leaf is a single sheet...[more]
Cloth
"Cloth-bound" generally refers to a hardcover book with cloth covering the outside of the book covers. The cloth is stretched...[more]
gilt
The decorative application of gold or gold coloring to a portion of a book on the spine, edges of the text block, or an inlay in...[more]

Home > Excelsa Scripta Rare Books > A MAN OF THE PEOPLE