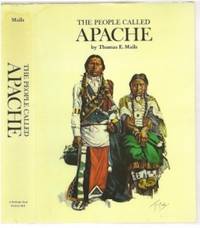 447 pages with maps, 16 color plates, over 300 black and white photographs, and over 200 drawings, bibliography and index. Folio (12 3/4" x 9 1/4") bound in original publisher's dark brown cloth with black lettering to spine in original pictorial jacket. Drawings by Thomas Mails. First edition. They called themselves The People, but to nearly everyone else in their world they were known as The Enemy. And they earned the name in every respect. Seldom has any people fought harder for the preservation of their territory and their way of life. We know them today as the Apache, an ancient people who, in historic times, made a prolonged and desperate effort to drive the Spanish, the Mexicans and finally the Anglo-Americans out of their ancestral lands. Unsuccessful, they were placed in four reservations, on or near their original ranges in Arizona and New Mexico, some of the most ruggedly beautiful land in this country. There most of them still live, accepting the White ways yet keeping many of the old customs still alive. Their renowned vitality and tenacity have served them well, for despite the tragic adjustments and abuses of early reservation life, they have managed to preserve their language, their heritage, and the most important parts of their ancient life-way, at the same time struggling to become industrious, progressive American citizens. The People Called Apache is a complete account of that life-way past and present. Though known by a common name and sharing many customs and beliefs, the four Apache groups of Arizona and New Mexico - Western Apache, Chiricahua, Mescalero and Jicarilla - have for centuries been distinct units. Every aspect of their individual life-ways is examined here in detail: history, social structure, warfare; housing, dress, food; arts, crafts, and games; birth, courtship and death. The author gives careful attention to Apache religion - which treats each day as a sacred path, to be walked with concern for all created things - and in particular to important religious practices such as the puberty rites and the curing ceremonies, which bring the Apache into close contact with the supernatural. Throughout, he lays stress on both the similarities and the differences among the groups. Condition: Page ends soiled. Jacket stained at head spine else a very good copy in like jacket.

Seller rating:
This seller has earned a 5 of 5 Stars rating from Biblio customers.
Biblio.com member since 2005
Fort Worth, Texas
Ask Seller a Question

jacket
Sometimes used as another term for dust jacket, a protective and often decorative wrapper, usually made of paper which wraps... [More]
Cloth
"Cloth-bound" generally refers to a hardcover book with cloth covering the outside of the book covers. The cloth is stretched... [More]
soiled
Generally refers to minor discoloration or staining.
First Edition
In book collecting, the first edition is the earliest published form of a book. A book may have more than one first edition in... [More]
spine
The outer portion of a book which covers the actual binding. The spine usually faces outward when a book is placed on a shelf.... [More]
New
A new book is a book previously not circulated to a buyer. Although a new book is typically free of any faults or defects, "new"... [More]
folio
A folio usually indicates a large book size of 15" in height or larger when used in the context of a book description. Further,... [More]