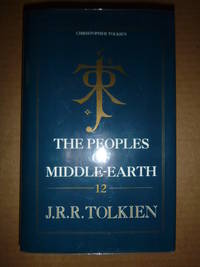 London: HarperCollinsPublishers (Harper Collins) 1996 First Edition, First Impression 8vo xiv,482pp ISBN 0-261-10337-7, 1996 Ex-Library, Near Fine original dark blue cloth, corners very slightly bumped, tape stains to boards, edges lightly tanned as is common with this edition, minimal library markings, specifically small piece of magnetic tape to front pastedown, small stamp to ffep, small label attached to rear end-paper, otherwise internally Fine throughout, in Near Fine intact complete Dust Wrapper. A very attractive copy of the original HarperCollins First Edition, of which there was only one print-run, despite being ex-library. For years, rumors circulated that HarperCollins pulped part of the print-run for this title. However, Neil Holford at TolkienBooks. net has the following information: according to David Brawn at HarperCollins, "2,525 copies were printed for the trade, plus 1,565 for BCA, all in the same run. Unlike many book club editions of books at that time, for this series the books always came from the same print run so there would often have been no discernible difference between them in terms of quality. However, BCA sold their copies very quickly and then bought 500 copies from the trade run, rapidly shortening the shelf life of the edition."

Internet booksellers since 1994. All prices in US dollars. Grading is conservative. Dust Jackets are protected in Brodart sleeves. Payment required with order. Payment for International orders accepted by PayPal, after ascertaining correct postage. Foreign cheques are not accepted. Australian Postal Money Orders & Cheques are accepted and must be made payable to \"Nick Smiles\". Please note all books are priced in US dollars. For orders taken within Australia, we adjust prices to Australian currency for billing purposes. Shipping by airmail unless requested otherwise. Returns accepted by prior arrangement. A 10% re-stocking fee applies if book was as described or ordered in error.

Seller rating:
This seller has earned a 5 of 5 Stars rating from Biblio customers.
Biblio.com member since: 2005
Kellerberrin, Western Australia
Ask Seller a Question

About N & A Smiles

We are located on the Great Eastern Highway in the Central Wheatbelt town of Kellerberrin in Western Australia, 2-1/2 hours drive from Perth. We are directly opposite East Crossing Road, nestled in between the Tyre Service and the TAFE College. Public Transport is available via the Prospector & Avon Link passenger train services, or via the Goldfields Express bus service. We specialise in Collectible Paperbacks with an emphasis on Science Fiction and Crime Novels, but we also carry an extensive range of Mythology, Icelandic Sagas, Middle English Texts, Australian Exploration, Aboriginal Studies, Tolkien, Gor Books, Proto Science Fiction, Early SF Pulp Magazines and much more. Drop in for a browse and cup of coffee.

fine
A book in fine condition exhibits no flaws. A fine condition book closely approaches As New condition, but may lack the...[more]
Cloth
"Cloth-bound" generally refers to a hardcover book with cloth covering the outside of the book covers. The cloth is stretched...[more]
First Edition
In book collecting, the first edition is the earliest published form of a book. A book may have more than one first edition in...[more]
ffep
A common abbreviation for Front Free EndPaper. Generally, it is the first page of a book and is part of a single sheet that...[more]
edges
The collective of the top, fore and bottom edges of the text block of the book, being that part of the edges of the pages of a...[more]