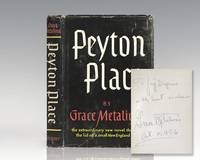 The plot of Peyton Place is quite controversial among modern first editions, and the history of its publication is just as scandalous. Peyton Place was largely based off of the small town scandals that were known to plague several New England towns. Some of the places and characters so closely resembled their real life counterparts that author Grace Metalious was actually sued for libel. Some of the people in these towns were particularly distraught that their communities were depicted so negatively, the reception of Peyton Place nearly drove Metalious into hiding. The book was first published by Julian Messner, Inc in 1956, and it was an instant hit. Through word of mouth, it sold approximately 60,000 copies in the first two weeks of its publication, and it stayed on the New York Time best seller list for 59 weeks. It was so popular, it was adapted into a film and into a multi-year daytime soap opera. The first US edition dust jacket is fairly plain and the paper quality was low, so the jacket is likely to be browned or yellowed with age. Famously, Metalious was sued for libel by one of the people who was included in the book. Tomas Makris was featured in Peyton Place , and his name and physical characteristics matched the real-life individual. Notably, the character's name in UK edition was changed to Michael Kyros, and the character's name was changed in later US editions to Michael Rossi. In a shocking twist that infuriated many, Metalious had actually forged Makris' name on the release form. Such behavior is of course condemned by the literary community.

inscribed
When a book is described as being inscribed, it indicates that a short note written by the author or a previous owner has...[more]
jacket
Sometimes used as another term for dust jacket, a protective and often decorative wrapper, usually made of paper which wraps...[more]
octavo
Another of the terms referring to page or book size, octavo refers to a standard printer's sheet folded four times, producing...[more]
First Edition
In book collecting, the first edition is the earliest published form of a book. A book may have more than one first edition in...[more]