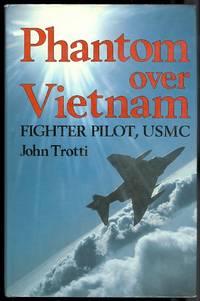 Shrewsbury: Airlife, 1984. 250 pp, large 8vo (9" H). B&w illustrations, map. "What is it like to fly a fighter in combat? More specifically, what was it like to fly an F-4 Phantom in combat over Vietnam? The answers are in this exciting personal account by ex-Marine Corps pilot John Trotti, who flew over 600 missions during his two tours of duty there. Reading (this book) is the closest thing to actually flying a fighter aircraft in war. The reader experiences the life of a figher pilot - from the boredom of the Hot Pad, waiting for the Scramble, to moments of terror as a SAM pops out of the cloud deck, heading straight for your aircraft. You ride in the cockpit with Trotti as he bores straight down to target and pickles his bombs, feeling the exhilaration of no holds barred flying, then a stunned sense of loss as a friend's aircraft goes down in flames. You see a pilot's innermost fears and learn his feelings about war." Three tiny faint scuffs on front board, wrinkling at top/bottom of spine, a few pages with tiny corner crease. Dust jacket has light to moderate rubbing, wrinkling and light wear at top/bottom of spine and flap-folds.. Hard Cover. Very Good/Very Good-.

We accept the following forms of payment:

VISA & MASTERCARD [If contacting us directly by email please ensure you provide the \'FULL NAME\' as it appears on your card, 4 digit expiry date, the full number on card, and the 3 or 4 digit CVV security on the back of the card]; Personal, Business or Cashiers Check; International Money Order or PayPal (PayPal e-mail is capricornbks@sympatico.ca) (Sorry, we are not able to process other credit cards directly at this time). Canadian residents will be charged 5% GST on converted amount.

SHIPPING: Shipping rates are based upon the weight of a standard size book (8vo) or a large format trade paperback up to 1kg (2.2lbs). Larger, heavier books will be shipped at cost. We will e-mail you a quote for your approval, before we ship. Mass market paperback books, in many cases, will cost less to ship to the U.S.A. and Internationally. We will inform you by e-mail or adjust the charge when we process your order.

RETURNS: Books may be returned if not as described within 10 days with prior notice. Please e-mail us prior to returning book - thank you.

Seller rating:
This seller has earned a 5 of 5 Stars rating from Biblio customers.
Biblio.com member since: 2003
Oakville, Ontario
Ask Seller a Question

Welcome to Capricorn Books. We offer a wide range of used, out-of-print and antiquarian books in most subjects, for readers and collectors alike. Our business has been in operation since 1995 and we have been selling on the internet since 1999. We have a general stock with larger catalogues being Military History, History, Science Fiction/Fantasy, Children's, Art, Antiques. All orders are processed promptly. Our goal is to ship your book(s) within 24 hours and notify you when we have done so - we always try to keep you informed. Enjoy your visit!

jacket
Sometimes used as another term for dust jacket, a protective and often decorative wrapper, usually made of paper which wraps...[more]
rubbing
Abrasion or wear to the surface. Usually used in reference to a book's boards or dust-jacket.
spine
The outer portion of a book which covers the actual binding. The spine usually faces outward when a book is placed on a shelf....[more]