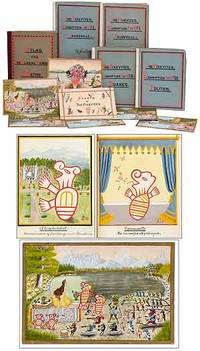 The Pixeyites: Original Manuscript and Artwork Satires by James Churchward

The Pixeyites: Original Manuscript and Artwork Satires by James Churchward

(Mount Vernon, New York), 1935. Softcover. Near Fine. A highly unusual collection of satirical illustrated manuscript stories, several series of satirical gouache paintings, a series of painted symbols, and other artworks and letters by the British-born engineer, inventor, and occult writer James Churchward. Churchward's remarkable cast of satirical figures, known collectively as the Pixeyites, are ostensibly based on the Niven stones, which were pre-Columbian stone tablets bearing indecipherable pictographs and related markings, unearthed in 1921 by the English mineralogist William Niven in the Valley of Mexico. Most of the original 2600 andecite tablets were lost or dispersed and have never been recovered. All that remains are Niven's original rubbings, a selection of which are here stringently reproduced by Churchward as dramatic satirical figures superimposed upon new landscapes, timelines, and situations, thereby endowing them with a new life of their own. Now, they are "Pixeyites" - each unique figure strikingly realized with humor and wit (no doubt inspired by the mythical "Pixies" believed to inhabit Neolithic sites in and around Cornwall and Okehampton, Devon, where Chuchward was born).

The collection consists of five quarto volumes: each handwritten in ink and illustrated with gouache paintings (totaling 272 foliated leaves with 96 full-page paintings of individual Pixeyite figures and many other painted illustrations); four sets of satirical gouache paintings, most of which depict the Pixeyites engaged in all sorts of outdoor "sports" and "frolics" (totaling 72 unique artworks, most on 6" x 9" sheets); and one set of 22 hand-painted "Symbols of the Four Primary Forces." Also included is a small cache of letters from Churchward to two young ladies whom he befriended a few years before his death in 1936. All of the paintings are signed with Churchward's hand painted signature or monogram. Many of the individual gouache paintings have manuscript descriptions in pencil on the back. The set of "Symbols" have manuscript descriptions in ink. The five quarto volumes are in painted wraps with quarter cloth backstrips. The first volume ("Atlas") has a few small holes in the margins of two paintings (not affecting the images), else all five volumes and all of the other artworks are in fine condition.

The paintings were created over an eight-year period, during which Churchward won international notoriety for his book: *The Lost Continent of Mu - Motherland of Man* published in 1926, in which he claimed to have proved the existence of a lost continent, called Mu, in the Pacific Ocean. In that work Churchward presents his theory that a set of ancient tablets which he discovered in India (the Nacaal tablets), as well as Niven's set of stone tablets from Mexico, both originated from the lost, antediluvian civilization of Mu. He claimed Mu was the site of the Garden of Eden and home to an advanced civilization. Whereas in this and other books by Churchward, in which he attempts to support his claims with scientific arguments, in *The Pixeyites* he takes imaginative delight in attacking the scientific establishment of the day by depicting the pre-Columbian symbolical figures as members of the "Chimalpa Vaudeville Club; composed of members of the Pixey Town Scientific Society."

Churchward skillfully recreates the stone symbols by placing them in a variety of whimsical environments (English tea rooms, volcanic landscapes, icy tundra, verdant moorlands): all of the paintings are accomplished and visually striking, many have elaborate ornamental borders in the style of a Persian miniature. The personas given to the figures themselves are rarely flattering. Several are quack scientists with names like "Dr. Bighead," and they are depicted by Churchward in his written satire as espousing illogical arguments, misunderstanding concepts, backbiting, and fighting one another. Churchward insists that these elaborate volumes were never meant for publication, but were created "simply ... to amuse my friends when they visit." As he had clashed with the scientific community, so too do the stark, abstract symbolic figures clash with their lush, formal environments. The resulting aesthetic is whimsical and surreal, bordering on Dada.

The same can be said about the four sets of satirical gouache paintings and other loose artworks. One set titled: *The Frolics of the Pixeys* consists of 23 paintings assembled by Churchward into an album which he gave to his friend Nina Gade: "These rough sketches were made for you as a Christmas present. Hoping that you will get some sort of a kick out of them." Among the other three sets of loose paintings, one is titled: *Sports of the Pixeyites* (consisting of seven paintings); one bears a combined title consisting of 24 paintings: "The Tale of the Swordfish: for Sally" and "The Tale of the Busted 18th: for Nina*; and one consisting of 15 paintings is untitled. Most of these 72 artworks depict the Pixeyites (individually and in groups) and other members of the "Pixeyite Club" (various animals and birds, including a large frog named "Dr. Croaker") engaged in all sorts of frolics and outdoor sporting activities: golfing and fishing (including several fishing mishaps), archery, woodland walks and serenading, sailing, skiing, skating, etc. There are three other loose artworks, including a large portrait of a Pixeyite walking a poodle, and a set of 22 hand painted symbols consisting of various Crosses and Winged Circles, including two symbols drawn from Niven's Mexican tablets.

The entire collection of artworks could be rightfully seen as a continuation of the Mu Saga, and certainly shed a great deal of light on the puckish humor that Churchward deployees towards his critics. The Mu books remained in print for many decades and despite the skepticism they rightfully attracted, the saga continues to resonate with seekers of utopias, alongside tales of the lost worlds of Atlantis and Shangri-La. These manuscripts seem eminently suitable for publication. A detailed list is available on request.

quarto
The term quarto is used to describe a page or book size. A printed sheet is made with four pages of text on each side, and the...[more]
New
A new book is a book previously not circulated to a buyer. Although a new book is typically free of any faults or defects,...[more]
fine
A book in fine condition exhibits no flaws. A fine condition book closely approaches As New condition, but may lack the...[more]
leaves
Very generally, "leaves" refers to the pages of a book, as in the common phrase, "loose-leaf pages." A leaf is a single sheet...[more]
miniature
A book that is less then 3 inches in width and ...[more]