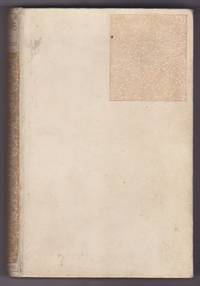 London: David Bogue, 1881. First Printing, One of 250 copies only. "Handsomely Bound" Thick Parchment Vellum boards by Matthew Bell, in excellent state, with gilt stamped, "much smaller prune blossom design", as called for. Light age, with a few spots, some rubbing, extremity wear. Watermarked "Van Gelder", Dutch Handmade Paper, Top Edge Gilt (T.E.G.) very bright, other edges deckled, with "leaves varying slightly in size" as issued. Light browning offset to endpaper as per usual. Binding extremely tight. Free terminal of "Panthea" remains unopened. An exceptional copy of Wilde's First True Book, in which he oversaw the production, designing the prune blossoms binding, "wanting the cover and typography to be distinctive" (Ellmann, p.137). With a "Limited Edition", total print run of only 750 copies, it was issued in three "Printings" of 250 each. This First was released June 30, the Second and Third to follow on July 22 and September 26, using both the First Print Run sheets, and later printed sheets, with a new title-page. Some wear to binding, age as above, still, approaching Fine. (Mason [304]).. First Edition. Vellum Parchment, T.E.G., Sewn. Near Fine. 8vo - over 7¾" - 9¾" tall.

From the book:Not that I love thy children, whose dull eyesSee nothing save their own unlovely woe,Whose minds know nothing, nothing care to know, -But that the roar of thy Democracies,Thy reigns of Terror, thy great Anarchies,Mirror my wildest passions like the seaAnd give my rage a brother -! Liberty!For this sake only do thy dissonant criesDelight my discreet soul, else might all kingsBy bloody knout or treacherous cannonadesRob nations of their rights inviolateAnd I remain unmoved - and yet, and yet,These Christs that die upon the barricades,God knows it I am with them, in some things.

Most books have images, email for further description or additional images if needed. All sales returnable if not as described.

Seller rating:
This seller has earned a 5 of 5 Stars rating from Biblio customers.
Biblio.com member since: 2005
NY, New York
Ask Seller a Question

Gates Past Books specializes in hard to find Occult Literature titles. If we do not have your book in our inventory, we have an uncanny ability locating it.

top edge gilt
Top edge gilt refers to the practice of applying gold or a gold-like finish to the top of the text block (the edges the...[more]
New
A new book is a book previously not circulated to a buyer. Although a new book is typically free of any faults or defects,...[more]
Parchment
Pages or book covering made from a prepared animal skin. Parchment describes any animal skin used for books, while vellum is a...[more]
tight
Used to mean that the binding of a book has not been overly loosened by frequent use.
vellum
Vellum is a sheet of specialty prepared skin of lamb, calf, or goat kid used for binding a book or for printing and writing. ...[more]
fine
A book in fine condition exhibits no flaws. A fine condition book closely approaches As New condition, but may lack the...[more]
rubbing
Abrasion or wear to the surface. Usually used in reference to a book's boards or dust-jacket.
gilt
The decorative application of gold or gold coloring to a portion of a book on the spine, edges of the text block, or an inlay in...[more]
First Edition
In book collecting, the first edition is the earliest published form of a book. A book may have more than one first edition in...[more]
offset
A technique of printing where the inked image or text is ...[more]
unopened
A state in which all or some of the pages of a book have not been separated from the adjacent pages, caused by a traditional...[more]
edges
The collective of the top, fore and bottom edges of the text block of the book, being that part of the edges of the pages of a...[more]