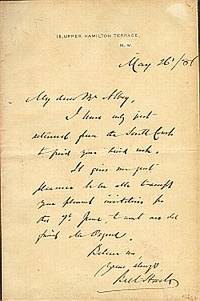 POEMS, Signed By Harte with ANS

POEMS, Signed By Harte with ANS

Boston: Fields, Osgood, & Co, 1871. green, gilt dec. beveled cloth, gilt dec. spine, 152 pages, front endpaper starting, light edge wear and minor spotting to covers, 13 line ALS, double-folded, note with embossed address, attached to front free endpaper, the address on the stationary reads."15,Upper Hamilton Terrace, N.W. " the note reads."May 26/86 , My Dear Mr Abbey, I have only just returned from the South Coast to find your kind note. It gives me great pleasure to be able to accept your pleasanr invitation for the 7th June, to meet our old friend Osgood, Believe me, Yours always, Bret Harte" SEE BAL 7253 . The address on the stationary is that of Harte's close friends in London, Arthur and Anna Van de Velde. The note was written during Harte's tenure as US Consul in Glasgow. During his term as US Consul in Glasgow, Harte was usually in London, pursuing his literary career. CONTENTS: San Francisco, from the sea ; The angelus ; The mountain heart's-ease ; Grizzly ; Madrono ; Coyote ; To a sea-bird ; Her letter ; Dickens in camp ; What the engines said ; "The return of Belisarius" ; "Twenty years" ; Fate -- In dialect. "Jim" ; Chiquita ; Dow's flat ; In the tunnel ; "Cicely" ; Penelope ; Plain language from truthful James ; The society upon the Stanislaus -- Poems from 1860 to 1868. John Burns of Gettysburg ; The tale of a pony ; The miracle of Padre Junipero ; An Arctic vision ; To the Pliocene skull ; The ballad of the Emeu ; The aged stranger ; "How are you, sanitary?" ; The reveille ; Our privilege ; Relieving guard -- Parodies. A geological madrigal ; The willows ; North Beach ; The lost tails of Miletus. Size: 12mo., 17.5 Cm. Signed by Author. First Edition. Hard Cover. Very Good. Hardbound,.

Returnable upon receipt with prior notification. If paying by check, please allow two weeks for clearance.

Seller rating:
This seller has earned a 4 of 5 Stars rating from Biblio customers.
Biblio.com member since: 2004
Fredericton, New Brunswick
Ask Seller a Question

Mail order only. 51 years as a bookseller

beveled
Beveled edges, or beveled boards, describe a technique of binding in which the edges of book boards have been cut into slanted...[more]
12mo
A duodecimo is a book approximately 7 by 4.5 inches in size, or similar in size to a contemporary mass market paperback....[more]
Cloth
"Cloth-bound" generally refers to a hardcover book with cloth covering the outside of the book covers. The cloth is stretched...[more]
gilt
The decorative application of gold or gold coloring to a portion of a book on the spine, edges of the text block, or an inlay in...[more]
First Edition
In book collecting, the first edition is the earliest published form of a book. A book may have more than one first edition in...[more]
BAL
Bibliography of American Literature (commonly abbreviated as BAL in descriptions) is the quintessential reference work for any...[more]
A.N.
The book is pristine and free of any defects, in the same condition as ...[more]
spine
The outer portion of a book which covers the actual binding. The spine usually faces outward when a book is placed on a shelf....[more]