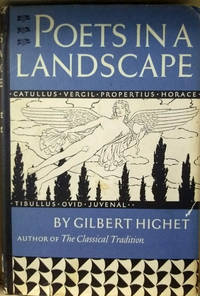 Poets in a Landscape

Poets in a Landscape

Gilbert Highet (1906–1978) was born in Glasgow, Scotland, to a middle-class family. He showed an early facility with Latin and Greek, reading Homer, Virgil, and Aeschylus for pleasure by the time he was sixteen. He attended Glasgow University, and later Oxford’s Balliol College, sweeping up most of the available prizes and scholarships along the way. In 1937 Highet joined the faculty of Columbia University, becoming a full professor at thirty-one. He taught at Columbia until 1972 (with the exception of a period during WWII, when he was stationed as an officer in Washington, D.C. and later assisted in the return of looted goods in Europe), becoming a legend for his animated and inspiring lectures. A very public intellectual, Highet served on the boards of Horizon magazine (1958–77) and the Book-of-the-Month Club (1954–78), was chief literary critic for Harper ’s (1952–54), and hosted a cultural affairs radio program, People, Places, and Books (1952–59), that was broadcast on more than three hundred stations in the U.S., Canada, and the U.K. Highet wrote, translated, or edited some twenty books, of which The Classical Tradition (1949) and The Art of Teaching (1950) remain the best known. He was married to Helen MacInnes, a successful writer of espionage novels, from 1932 until his death from cancer in 1978. Michael C.J. Putnam is MacMillan professor emeritus of classics and comparative literature, Brown University. Among his recent books are Poetic Interplay: Catullus and Horace and Jacopo Sannazaro: The Latin Poetry . In May 2009 he was awarded the Centennial Medal by the American Academy in Rome. He is a member of the American Academy of Arts and Sciences and of the American Philosophical Society.

We are happy to provide a refund within thirty days of the customer's receipt of any book(s) upon return of the book(s) to our shop.

Seller rating:
This seller has earned a 5 of 5 Stars rating from Biblio customers.
Biblio.com member since: 2005
Selkirk, New York
Ask Seller a Question

Old Saratoga Books owners Dan and Rachel Jagareski have been selling books since 1996. After running an open shop for twenty years in the historic village of Schuylerville we now sell books online and at book fairs. We are members of the Independent Online Booksellers Association (IOBA). Our specialties include books about history, science, cooking, children's books, and the arts. Rachel is a graduate of the Colorado Antiquarian Book Seminar and has attended Rare Book School in Charlottesville, Virginia.

jacket
Sometimes used as another term for dust jacket, a protective and often decorative wrapper, usually made of paper which wraps...[more]
Cloth
"Cloth-bound" generally refers to a hardcover book with cloth covering the outside of the book covers. The cloth is stretched...[more]