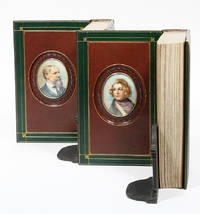 London: Chapman and Hall, 1837. First edition. Deluxe morocco by Sangorski. Fine. FIRST EDITION OF DICKENS'S FIRST GREAT SUCCESS: AN EXTRAORDINARY COPY CREATED FOR DICKENS'S SON, ALFRED TENNYSON DICKENS. BOUND BY SANGORSKI AND SUTCLIFFE WITH TWO MAGNIFICENT COSWAY-STYLE MINIATURES OF DICKENS AND EXTRA-ILLUSTRATED WITH 78 ORIGINAL WATERCOLOR DRAWINGS BY KYD. ALSO WITH A SIGNED CHECK BY DICKENS. "In February 1836, just after the appearance of the two-volume Sketches by Boz, two young booksellers who were moving into publishing, Edward Chapman and William Hall, approached Dickens to write the letterpress for a series of steel-engraved plates by the popular comic artist Robert Seymour depicting the misadventures of a group of cockney sportsmen, to be published in twenty monthly numbers, each containing four plates. They offered Dickens £14 a month for the work, an 'emolument' that was, as he wrote to Catherine, 'too tempting to resist' (Letters, 1.129). He accepted the commission ... but stipulated that he should be allowed to widen the scope of the proposed subject 'with a freer range of English scenes and people'. He then, he later recalled, 'thought of Mr Pickwick, and wrote the first number' ('Preface' to the Cheap Edition of Pickwick, 1847). This appeared on 31 March 1836 ... On 20 April Seymour committed suicide but the publishers boldly decided to continue the series, despite disappointing initial sales. Seymour was replaced, after the brief trial of R. W. Buss, with a young artist, Hablot Knight Browne (Phiz), who was Dickens's main illustrator for the next twenty-three years. In recognition of the fact that Dickens was now very much the senior partner in the enterprise, the number of plates was halved, the letterpress increased from twenty-eight to thirty-two pages, and his monthly remuneration rose to £21. With the introduction of Sam Weller in the fourth number sales began to increase dramatically and soon Pickwick was the greatest publishing sensation since Byron had woken to find himself famous, as a result of the publication of the first two cantos of Childe Harold, in 1812. By the end of its run in November 1837 Dickens's monthly serial had a phenomenal circulation of nearly 40,000 and had earned the publishers £14,000..." (Oxford Dictionary of National Biography). On this copy: With a letter dated 21 March 1914 from the antiquarian bookseller William Harvey Miner of The Torch Press Book Shop, explaining that this copy was intended as a present for Dickens's son Alfred Tennyson Dickens. Miner writes to (presumably) another bookseller, J.H.P. Warrington, saying that although he saw this copy in London, it was not for sale then and that he recently discovered that Warrington somehow acquired it. Miner notes that he has a customer that would pay $600 "or more" for it but that "of course you [Warrington] would be justified in charging any price for it, as it is unique." Alfred Tennyson Dickens died suddenly in 1912. The letter implies that this copy was being prepared for him by Sangorski and Sutcliffe, but when he died it was likely introduced to the book market without Tennyson Dickens ever receiving it. Bound by Sangorski and Sutcliffe in sumptuous green gilt-decorated morocco with "C.D." in gilt beneath a gilt lion stamped on a red morocco onlay on each front board, full red-and-green morocco pastedowns with exquisite Cosway-style miniatures - of a young Dickens in volume I and an older Dickens in volume II - silk free endpapers with facsimiles of Dickens's signature in gilt in front. The miniatures are of supremely high-quality, clearly the work of a talented artist. In addition to the issued 43 engraved plates by Phiz and R. Seymour, this copy is extra-illustrated with 78 fine original watercolors by the celebrated Dickens illustrator Joseph Clayton Clarke (1857-1937), who worked under the pseudonym "Kyd". Kyd published two popular books containing reproductions of his watercolors (The Characters of Charles Dickens Pourtrayed in a Series of Original Water Colour Sketches by Kyd (1889) and Some Well Known Characters from the Works of Charles Dickens (1892) and contributed character illustrations to magazines as well as selling them directly to collectors. Six of his illustrations were issued as Royal Mail stamps in 2012 to mark the 200th anniversary of Dickens's birth. This copy also includes a cancelled check signed by Dickens (dated 1868) and an extra engraved frontispiece of Dickens by Finden (dated 1839). First edition in book form, with all plates in the early state (page numbers and no captions) but with Phiz plates replacing the suppressed Buss plates; corrected "Weller" engraved title page. Bound with half-title. London: Chapman and Hall, 1837. Two volumes. Octavo, c1910 sumptuous decorated morocco by Sangorski and Sutcliffe with Cosway-style miniatures at the front of each volume. Nearly invisible embossed owner's name on front binder's blank. A few of the engraved plates foxed (much better than usual); overall text and plates unusually clean. Bindings in nearly perfect condition. A MAGNIFICENT, UNIQUE COPY WITH KYD WATERCOLORS AND SPECTACULAR COSWAY-STYLE MINIATURES.

The Posthumous Papers of the Pickwick Club  (commonly known as  The Pickwick Papers ) is the first novel published by Charles Dickens.  The Posthumous Papers Of The Pickwick Club  catapulted the 24-year-old author to immediate fame. Readers were captivated by the adventures of the poet Snodgrass, the lover Tupman, the sportsman Winkle &, above all, by that quintessentially English Quixote, Mr. Pickwick, & his cockney Sancho Panza, Sam Weller. From the hallowed turf of Dingley Dell Cricket Club to the unholy fracas of the Eatanswill election, via the Fleet debtor’s prison, characters & incidents sprang to life from Dickens’s pen, to form an enduringly popular work of ebullient humor & literary invention The novel was published in 19 issues over 20 months by Chapman and Hall, London in 1836.  After the publication the widow of illustrator Robert Seymour claimed that the idea for the novel was originally her husband's; however, in his preface to the 1867 edition, Dickens strenuously denied any specific input, writing that "Mr. Seymour never originated or suggested an incident, a phrase, or a word, to be found in the book.

Read more: Identifying first editions of The Posthumous Papers of the Pickwick Club [The Pickwick Papers]

About The Manhattan Rare Book Company

The Manhattan Rare Book Company offers fine books in all fields, specializing in the important, beautiful, and hard-to-find.

foxed
Foxing is the age related browning, or brown-yellowish spots, that can occur to book paper over time. When this aging process...[more]
octavo
Another of the terms referring to page or book size, octavo refers to a standard printer's sheet folded four times, producing...[more]
title page
A page at the front of a book which may contain the title of the book, any subtitles, the authors, contributors, editors, the...[more]
First Edition
In book collecting, the first edition is the earliest published form of a book. A book may have more than one first edition in...[more]
morocco
Morocco is a style of leather book binding that is usually made with goatskin, as it is durable and easy to dye. (see also...[more]
gilt
The decorative application of gold or gold coloring to a portion of a book on the spine, edges of the text block, or an inlay in...[more]
fine
A book in fine condition exhibits no flaws. A fine condition book closely approaches As New condition, but may lack the...[more]