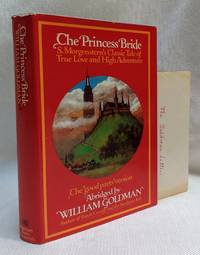 New York: Harcourt Brace Jovanovich, Inc, 1973-09-01. First Edition. Hardcover. Very Good/Very Good. Harcourt Brace Jovanovich, Inc., 1973; stated First Edition with 'B C D E' centered beneath, indicating First Printing (true 1st edition), per HBJ practice at this time; copy of the first version of the letter distributed by HBJ laid-in at front (more about letter at end of description); [viii], 308pp.; light grey cloth boards with stamped black and red titling on spine; two-color text, black for "Morgenstern", red for "Goldman". Binding is tight, sturdy, and square; very minor wear at head/foot of spine, else boards in very good condition, corners sharp, titling bold; text also very good throughout; a few very small, sparse foxing spots on top and front edges of page block. Unclipped dust jacket ($7.95) has some minor fraying over spine ends, one small closed tear at top edge of rear panel, and a gentle crease to the front inner flap, else in VG/NF condition; jacket arrives wrapped in protective mylar. On the letter: (from vulture.com) "The book is peppered with interruptions from Goldman, telling the reader what he left out of the original text. Only once does he mention writing his own scene, a powerfully emotional reunion scene between the storyâ€™s hero, Wesley, and his true love, Buttercup. But itâ€™s not in the book, Goldman explains, because the publisher wouldnâ€™t allow him to put words into the great Morgensternâ€™s mouth. Goldman does, however, tell the reader that they can get the scene he wrote mailed to them if they write to the bookâ€™s publisher, Harcourt Brace Jovanovich. Thousands of people dutifully wrote in, who helped oblige Goldman in his trickery and multi-level storytelling. Because nobody ever got that scene. Goldman certainly never wrote one, but that wasnâ€™t the point. The point is that, if you wrote in to HBJ (and later, Random House), you got a funny letter perpetuating the Goldman â€œcharacterâ€ and Morgenstern charade â€¦ and never the reunion scene." Ships from Dinkytown in Minneapolis, Minnesota.

The Princess Bride is a 1973 novel written by William Goldman. It was originally published in the United States by Harcourt Brace Jovanovich. The book combines elements of comedy, adventure, fantasy, romance and fairy tale. It is presented as if it were an abridgment of a work by S. Morgenstern, and Goldman's 'commentary' asides are constant throughout. It was made into a film of the same name in 1987 by Rob Reiner, and an attempt to adapt it into a musical was made by Adam Guettel.

This is an easy book to recommend. It can be appreciated on several levels. Most simply, it is an action filled romance, set in medieval times, chronicling tribulations a young farm boy who leaves home to make his fortune and so win the love of Buttercup. The plot is full of twists and turns, and while it's entirely suitable for young adults, the book shortly reveals itself as gently crafted sendup of both romance and adventure. Golding's finely crafted prose maintains your interest, and the humorous intent gradually builds. There are numerous great scenes ("For you see, I am also not left-handed" and "Hello, my name is Inigo Montoya" come to mind), and the dialog, while uneven, is at time sublime. While this is probably not great literature, and it may not make you a better person, it may very likely provide you with excellent entertainment. The movie adaptation is very well done, but it leaves out much of the subtlety and character development the Golding provides. The Princess Bride is a fun read.

bookseller
The Book House in Dinkytown

The Book House in Dinkytown

The Book House in Dinkytown

Seller rating:
This seller has earned a 5 of 5 Stars rating from Biblio customers.
Biblio.com member since 2015
Minneapolis, Minnesota
Ask Seller a Question

About The Book House in Dinkytown

Used books bought and sold, classics and collectibles in all fields. In Dinkytown since 1976.

Cloth
"Cloth-bound" generally refers to a hardcover book with cloth covering the outside of the book covers. The cloth is stretched... [More]
tight
Used to mean that the binding of a book has not been overly loosened by frequent use.
jacket
Sometimes used as another term for dust jacket, a protective and often decorative wrapper, usually made of paper which wraps... [More]
spine
The outer portion of a book which covers the actual binding. The spine usually faces outward when a book is placed on a shelf.... [More]
edges
The collective of the top, fore and bottom edges of the text block of the book, being that part of the edges of the pages of a... [More]
laid-in
"Laid In" indicates that there is something which is included with, but not attached to the book, such as a sheet of paper. The... [More]
First Edition
In book collecting, the first edition is the earliest published form of a book. A book may have more than one first edition in... [More]