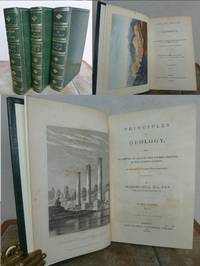 PRINCIPLES OF GEOLOGY Being an Attempt to Explain the Former Changes of the Earth's Surface by Reference to Causes Now in Operation.

PRINCIPLES OF GEOLOGY Being an Attempt to Explain the Former Changes of the Earth's Surface by Reference to Causes Now in Operation.

London, John Murray, 1830.. FIRST EDITIONS, COMPLETE SET, 3 VOLUMES 1830-1833, PRESENTATION SET to "W(illiam) L(onsdale) (geologist see below) from the author" inscribed on half-title of Volume I and "Lieut. Lonsdale from the author" on front endpaper to Volume II (see attached images). The signature on volume 1 is either in a secretaries hand or Lonsdale's, but the signature on Volume two is in Lyell's hand. Mixed set, volume lll from another set and is slightly trimmed. 8vos, approximately 215 x 135 mm, 8½ x 5½ inches, VOLUME I: engraved frontispiece, 1 engraved folding map, 1 engraved plate plus 33 text illustrations; VOLUME II: hand coloured aquatint frontispiece, folding hand coloured map, 8 text illustrations; VOLUME III: Hand coloured frontispiece, 4 engraved plates, coloured map, 88 text illustrations, pages: Volume I, xvi, [1]-511 including index plus 17 page Murray catalogue dated June 1830; Volume II, xii, [1]-330, including index plus 16 page catalogue dated December 1831, Volume III, xxxi plus Errata, [1]-398, [1]-110 -Appendix, Glossary and Index, last page publisher's adverts, half-title in Volume I, not called for in Volume II, Volume III lacks half-title. Handsomely bound in modern green full morocco, single gilt ruled border with inset blind stamped border, gilt raised bands to spines, 5 gilt framed compartments with gilt motif, gilt lettering, new endpapers. Frontispiece in Volume I lightly spotted, plate 3 with 2 images lightly browned and slighly foxed, light offsetting on page 1 from folding map in Volume II, Volume III, frontispiece has fox spot to 1 margin, plate and maps have pale foxing, very occasional small pale mark to margins in both volumes, otherwise very good clean tight set. This work has been called the most important scientific book ever. A stunning claim, but certainly Charles Lyell's Principles of Geology, published in 1830, shook prevailing views of how Earth had been formed. His book was an attack on the common belief among geologists and other Christians that unique catastrophes or supernatural events -- such as Noah's flood -- shaped Earth's surface. Lyell argued that the formation of Earth's crust took place through countless smaller changes occurring over long periods of time, all according to known natural laws. His proposal was that the forces shaping the planet have operated continuously throughout its history. He also wrongly assumed that these causes must have acted only with the same intensities now observed, which would rule out asteroid impacts and the like. Darwin read Lyell's landmark text while on the Voyage of the Beagle, and was much inspired by it. His own experiences during the voyage backed up Lyell's theories of how the shifting crust of the Earth was one of these long-acting, gradual, shaping forces. See Printing and the Mind of Man, page 208, Chapter on The Theory of Evolution, No. 344; Dibner Library, Heralds of Science, revised edition, page 46, No.96. William Lonsdale (1794-1871) became a serious geologist and palaeontologist after a career in the army which ended in 1829. He wrote several papers on fossiles and won the Wollaston medal in 1846 for his research on the various kinds of fossil corals. MORE IMAGES ATTACHED TO THIS LISTING, ALL ZOOMABLE, FURTHER IMAGES ON REQUEST. POSTAGE AT COST.

tight
Used to mean that the binding of a book has not been overly loosened by frequent use.
morocco
Morocco is a style of leather book binding that is usually made with goatskin, as it is durable and easy to dye. (see also...[more]
raised band(s)
Raised bands refer to the ridges that protrude slightly from the spine on leather bound books.  The bands are created...[more]
foxed
Foxing is the age related browning, or brown-yellowish spots, that can occur to book paper over time. When this aging process...[more]
New
A new book is a book previously not circulated to a buyer. Although a new book is typically free of any faults or defects,...[more]
plate
Full page illustration or photograph. Plates are printed separately from the text of the book, and bound in at production. I.e.,...[more]
inscribed
When a book is described as being inscribed, it indicates that a short note written by the author or a previous owner has...[more]
errata
Errata: aka Errata Slip A piece of paper either laid in to the book correcting errors found in the printed text after being...[more]
gilt
The decorative application of gold or gold coloring to a portion of a book on the spine, edges of the text block, or an inlay in...[more]