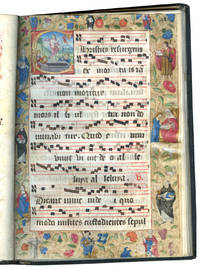 Processional (Dominican Use); illuminated manuscript on parchment in Latin and French with 12 historiated initials and 2 full-page illuminated borders by an artist working in the circle of the Mast of Girard Acarie

Processional (Dominican Use); illuminated manuscript on parchment in Latin and French with 12 historiated initials and 2 full-page illuminated borders by an artist working in the circle of the Mast of Girard Acarie

THIS LARGE, LAVISHLY ILLUMINATED MUSIC MANUSCRIPT PROCESSIONAL IS A FINE EXAMPLE OF THE SKILL OF THE ARTISTS WORKING DURING THE LAST FLOWING OF MEDIEVAL MANUSCRIPT ILLUMINATION IN NORTHERN FRANCE. Illuminated manuscript on parchment. France (Rouen), c. 1520-1530; c. 1525-1550; 1674. Dimensions 225 x 158 mm. Written in black in a gothic bookhand on nine long lines with nine lines of music with square notation on four-red line staves on most pages. TWELVE LARGE HISTORIATED INITIALS, that are elaborately shaped and colored in liquid gold, against grounds of red and blue, the biblical scenes in full color and highlighted with liquid gold, TWO FULL-PAGE ILLUMINATED BORDERS, one with Renaissance architectural forms and the other containing the standing figures of saints between flower sprays against a liquid gold ground. BINDING: Sixteenth- or seventeenth-century dark brown leather binding, blind tooled with simple panels back and front with gilt ornaments at the corners, rounded spine with five raised bands, elaborately decorated in gilt, red leather spine label, "Procession/ avec/ miniature," possibly rebacked or repaired with the spine laid down, marbled pastedowns. TEXT: Processionals include the texts and chants for liturgical processions. Each person within a religious order (friars, monks, or nuns) had his or her own Processional, usually rather small books. This Processional is somewhat larger, and is certainly more grandly illuminated than many surviving examples. Many of the surviving examples, particularly those with illumination, were made for nuns. ILLISTURATION: This illuminated Processional has twelve historiated initials that are similar in style to the works attributed to Master of Girard Acarie, who was active during the last years of the manuscript trade in Rouen. They were almost certainly by an artist working in his circle. Generally, the initials here share the Master's palate with rose, blue, red-grey, and gold predominating. The initials in this manuscript are smaller and more modest than ones attributed to Master of Girard Acarie himself. PROVENANCE: The style of the script and illumination establishes that this processional was made in Rouen c. 1520-1530. The contents follow the Dominican liturgy, particularly that of the Dominican nuns of the royal monastery of St. Mathew of Rouen. More recently, it belonged it Sir Thomas Phillipps. CONDITION: Covers are slightly scuffed, wear along bands, but in excellent condition. Full description and photographs available.

gilt
The decorative application of gold or gold coloring to a portion of a book on the spine, edges of the text block, or an inlay in...[more]
Parchment
Pages or book covering made from a prepared animal skin. Parchment describes any animal skin used for books, while vellum is a...[more]
miniature
A book that is less then 3 inches in width and ...[more]
fine
A book in fine condition exhibits no flaws. A fine condition book closely approaches As New condition, but may lack the...[more]
spine label
The paper or leather descriptive tag attached to the spine of the book, most commonly providing the title and author of the...[more]
spine
The outer portion of a book which covers the actual binding. The spine usually faces outward when a book is placed on a shelf....[more]
raised band(s)
Raised bands refer to the ridges that protrude slightly from the spine on leather bound books.  The bands are created...[more]
rebacked
having had the material covering the spine replaced. ...[more]