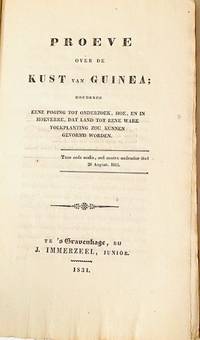 ONCE-UPON-A-TIME WE OWNED THE ORIGINAL MANUSCRIPT

First Edition. With half-title. Fine copy of a plan to establish Dutch settlements in Guinea, West Africa, as a method of making the Dutch part of the Gold Coast profitable after the end of the slave trade. The Dutch outlawed the slave trade in 1814, thereby making their West African colony less profitable. The author was born in Guinea in 1761 or 2, and his object here is to investigate the possibility of new settlements in Guinea. The Dutch had a long history in West Africa, ending with their selling what is now Ghana to the British in 1872, whereupon the British made it a crown colony. An interesting work on Dutch colonial and economic history, edited and printed by Immerzeeo. Tiele 355. Doornick 2977. Cat. NHSM I, p. 205.