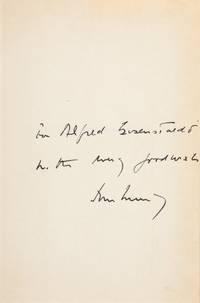 Eisenstaedt was perhaps the greatest of the photographers for Life magazine. "He was especially renowned for his ability to capture memorable images of important people in the news, including statesmen, movie stars, and artists" (New York Times). Eisenstaedt photographed Kennedy extensively during the 1960 presidential campaign and during his presidency.

In 1954 Kennedy determined to write a magazine article about famous political leaders who held unpopular positions that were nonetheless in the national interest. After Kennedy's back surgery he expanded the work into a book with the working title "Courage in the Senate." Published as Profiles in Courage, the book won the Pulitzer Prize for biography in 1957. It conferred on Kennedy an aura of intellectual seriousness which was critical to his acceptance as a presidential candidate a few years later. One of the most famous books by an American president, Profiles in Courage tells the stories of Kennedy's great predecessors in the Senate: John Quincy Adams, Daniel Webster, Thomas Hart Benton, Sam Houston, Edmund Ross, L. Q. C. Lamar, George Norris, and Robert A. Taft.

This is a splendid presentation copy linking Kennedy and a giant of photojournalism.

Profiles in Courage was written by John F. Kennedy when the iconic U.S. President was still a senator. The Pulitzer Prize-winning volume of short biographies tells of eight United States Senators who shown great courage under enormous pressure from their parties and their constituents. Among Kennedy’s featured senators were: John Quincy Adams, Daniel Webster, Thomas Hart Benton, Sam Houston, Edmund G. Ross, Lucius Lamar, George Norris, and Robert A. Taft. While these Senators suffered severe criticism and losses in popularity because of their actions, their stories are used to illustrate the principles and virtues that Kennedy believed were required of Americans in a century of progress.   Profiles in Courage hit the bestsellers list three times: when JFK was an up-and-coming Senator in the late 1950s; after he was elected President in 1960-61; and following his assassination in 1963-64. The book led to the creation of the “Profiles in Courage” award,  an annual award made to recognize displays of moral and political courage similar to those that Kennedy profiled.

Seller rating:
This seller has earned a 5 of 5 Stars rating from Biblio customers.
Biblio.com member since: 2011
Stevenson, Maryland
Ask Seller a Question

inscribed
When a book is described as being inscribed, it indicates that a short note written by the author or a previous owner has...[more]
Cloth
"Cloth-bound" generally refers to a hardcover book with cloth covering the outside of the book covers. The cloth is stretched...[more]
jacket
Sometimes used as another term for dust jacket, a protective and often decorative wrapper, usually made of paper which wraps...[more]