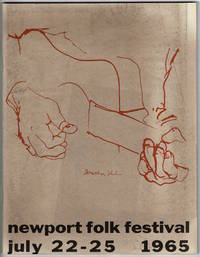 New York: Newport Folk Art Foundation, 1965. 4to, pp. 63, [1]; illustrated throughout; original pictorial wrappers a bit soiled, else very good. Joan Baez, Donovan, Maybelle Carter, Peter, Paul & Mary, Mississippi John Hurt, but who cares. That Sunday night, July 25, Dylan took the stage with guitarist Mike Bloomfield and Barry Goldberg of the Paul Butterfield Blues Band (Dylan with a Fender Stratocaster) - a scene familiar to all from Martin Scorsese's documentary, No Direction Home - thereby changing the course of pop music forever. That night at Newport, in an abbreviated performance, he opened with "Maggie's Farm," and followed that with "Like a Rolling Stone" (which had only been released five days earlier), and "It Takes a Lot to Laugh, It Takes a Train to Cry." He finished his performance that night with two acoustic songs, "Mr. Tambourine Man" and "It's All Over Now, Baby Blue." He never played at Newport again. This issue of the program also prints a short story, of sorts, by Bob Dylan, "Off the Top of My Head," featuring off-the-top-of-his-head characters, Horseman, Photochick, Miss Flunk, and the Prez.

soiled
Generally refers to minor discoloration or staining.
wrappers
The paper covering on the outside of a paperback.  Also see the entry for pictorial wraps, color illustrated coverings for... [More]