Home Books of the World The Puffin History of India for Children: 3000 BC to AD 1947 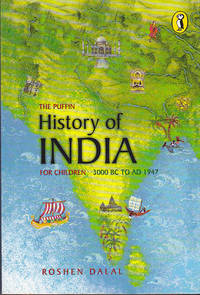 In an informal, engaging style, The Puffin History of India for Children 3000 BC - AD 1947 tells the fascinating story of India from the Indus Valley Civilization to Independence. Tracing the social, political, cultural and economic development of India, the book focuses on the high points of Indian history: the Vedic Age, the Mauryan Empire, the Gupta period, the Battle of Panipat, the conquests of Alauddin Khalji, who had the largest empire since Ashoka, the Brahmani and Vijayanagara kingdoms and their conflicts, the rule of Akbar, Shahjahan and Aurangzeb and the building of the Taj Mahal, the British conquest, the 1857 Revolt, the Nationalist movement and, finally, the triumph of Independence. The contributions of the important personalities who shaped this history, from Mahavira, Buddha, Alexander, Ashoka, Harsha and Babur to Tipu Sultan, Ranjit Singh, Mahatma Gandhi, Subhash Chandra Bose and Jawaharlal Nehru, are described in fascinating detail. The narrative pauses occasionally to dwell on the social and cultural life of the people, and the political, economic and religious changes that have been wrought over centuries, providing a comprehensive picture of what life was like in India at various points of time. The colorful description of people, events and cultures, complemented by a host of illustrations and maps, brings history dramatically to life for the reader. Informative, well researched, entertaining and easy of follow, this is the perfect introduction to India's history for children of all ages.

remainder mark
Usually an ink marking of some sort which indicates that the book was designated a remainder. In most cases, it can be found on...[more]
number line
A series of numbers appearing on the copyright page of a book, where the lowest number generally indicates the printing of that...[more]
trade paperback
Used to indicate any paperback book that is larger than a mass-market paperback and is often more similar in size to a hardcover...[more]

More books like this are on sale from Books of the World at 30% off!