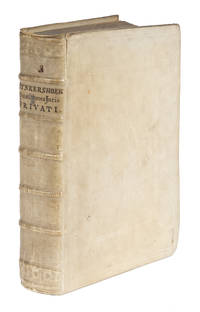 raised band(s)
Raised bands refer to the ridges that protrude slightly from the spine on leather bound books.  The bands are created... [More]
quarto
The term quarto is used to describe a page or book size. A printed sheet is made with four pages of text on each side, and the... [More]
rubbing
Abrasion or wear to the surface. Usually used in reference to a book's boards or dust-jacket.
vignette
A decorative design or illustration placed at the beginning or end of a ... [More]
plate
Full page illustration or photograph. Plates are printed separately from the text of the book, and bound in at production. I.e.,... [More]
recto
The page on the right side of a book, with the term Verso used to describe the page on the left side.
vellum
Vellum is a sheet of specialty prepared skin of lamb, calf, or goat kid used for binding a book or for printing and writing. ... [More]
First Edition
In book collecting, the first edition is the earliest published form of a book. A book may have more than one first edition in... [More]
verso
The page bound on the left side of a book, opposite to the recto page.
spine
The outer portion of a book which covers the actual binding. The spine usually faces outward when a book is placed on a shelf.... [More]
title page
A page at the front of a book which may contain the title of the book, any subtitles, the authors, contributors, editors, the... [More]