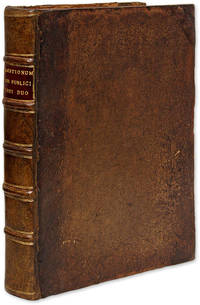 1737. Bijnkershoek, Cornelus van. Bijnkershoek, Cornelus van. First Edition of a Classic Study of International Law and the Laws of Armed Conflict Bynkershoek, Cornelius van [1673-1743]. Quaestionum Juris Publici, Libri Duo, Quorum Primus Est de Rebus Bellicis, Secundus de Rebus Varii Argumenti. Leiden: J.V. Kerckhem, 1737. [xxiv], 384, [32] pp. Quarto (7-3/4" x 6"). Contemporary calf, rebacked in period style, lettering piece and gilt-edged raised bands to spine, hinges and corners mended, edges rouged. Light rubbing and gatoring to boards, some rubbing to board edges. Title with large copperplate vignette printed in red and black. Light toning to text, somewhat heavier in places, some leaves have light foxing, offsetting to margins of endleaves. A handsome copy. $1,450. * First edition. One of the most important jurists and international lawyers of his time, Bynkershoek was a Dutch jurist who founded the positive school of international law, which favored principles drawn from usage and practice over theorems drawn from natural law. Quaestionum Juris Publici is one of his most important works on international law. The first and most important part, "De Rebus Bellicus," is one of the first modern assessments of the laws of war. Bynkershoek accepts that war encompasses violence against civilians and non-military targets. As Neff observes, he "candidly pronounced war to be an 'attempt to subjugate the enemy and all that he has by seizing all the power that the sovereign has over the state, that is to say, by exercising complete dominion over all persons and all things contained in that state. (...) [T]he whole state is placed in the legal attitude of a belligerent toward another state, so that every member of the one nation is authorized to commit hostilities against every member of the other, in every place and under every circumstance." Having acknowledged these facts, he goes on to condemn actions against civilians and advocates the fair treatment of prisoners of war. Beginning with Lord Mansfield, jurists and scholars have considered this to be Bynkershoek's greatest work. It was reissued in 1930 as a title in the Carnegie Classics of International Law series. Neff, War and the Law of Nations 204-205. Dekkers, Bibliotheca Belgica Juridica 16.

rubbing
Abrasion or wear to the surface. Usually used in reference to a book's boards or dust-jacket.
quarto
The term quarto is used to describe a page or book size. A printed sheet is made with four pages of text on each side, and the... [More]
spine
The outer portion of a book which covers the actual binding. The spine usually faces outward when a book is placed on a shelf.... [More]
Fair
is a worn book that has complete text pages (including those with maps or plates) but may lack endpapers, half-title, etc.... [More]
First Edition
In book collecting, the first edition is the earliest published form of a book. A book may have more than one first edition in... [More]
raised band(s)
Raised bands refer to the ridges that protrude slightly from the spine on leather bound books.  The bands are created... [More]
rebacked
having had the material covering the spine replaced. ... [More]
vignette
A decorative design or illustration placed at the beginning or end of a ... [More]
edges
The collective of the top, fore and bottom edges of the text block of the book, being that part of the edges of the pages of a... [More]
calf
Calf or calf hide is a common form of leather binding.  Calf binding is naturally a light brown but there are ways to treat... [More]
leaves
Very generally, "leaves" refers to the pages of a book, as in the common phrase, "loose-leaf pages." A leaf is a single sheet... [More]