Home Vancouver Bookseller QUARREL WITH THE KING (Earls of Pembroke) 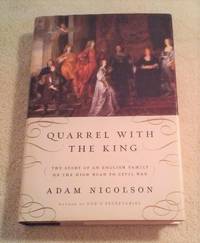 QUARREL WITH THE KING (Earls of Pembroke)

QUARREL WITH THE KING (Earls of Pembroke): The Story of an English Family on the High Road to Civil War

This is a mint-condition stated first edition of Quarrel with the King: The Story of an English Family on the High Road to Civil War, written in 2008 by the British author Adam Nicolson.

It tells the story of the first four earls of Pembroke, their wives, children, estates, tenants, and allies, following their high and glamorous trajectory from the 1520s through 1650—the most turbulent and dramatic years of English history—across three generations of change, ambition, resistance, and war. The Pembrokes were at the heart of it all: the richest family in England, with old blood and new drive, led as much by a succession of extraordinary women as by their husbands and sons. It is also the story of a power struggle, over a long century, between the family and the growing strength of the English Crown. For decades, questions of loyalty simmered; in 1642, these led to a brutal civil war, the bloodiest conflict England has ever experienced, in which the earl of Pembroke—who had been loyal till then—had no choice but to rebel against a king who he felt had betrayed both him and his country.

A version of this book appeared in the UK under the title: The Earls of paradise. Includes bibliographical references and index.

New
A new book is a book previously not circulated to a buyer. Although a new book is typically free of any faults or defects, "new"... [More]
First Edition
In book collecting, the first edition is the earliest published form of a book. A book may have more than one first edition in... [More]
jacket
Sometimes used as another term for dust jacket, a protective and often decorative wrapper, usually made of paper which wraps... [More]